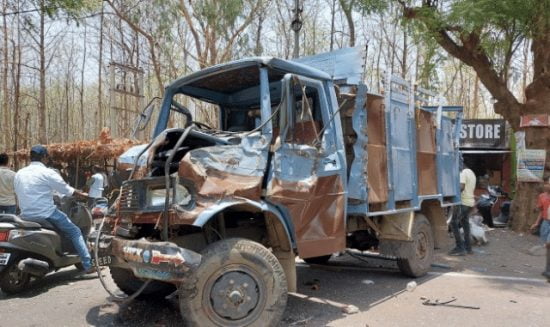 Balangir: A landgrabber ran out of luck when Balangir police caught him while fleeing Odisha after allegedly trying to pass off a pre-planned murder as a hit-and-run case.

The incident took place on Saturday when a pillion rider, identified as Srikant Bag, died while the motorcyclist Sanu Nayak sustained injuries after being hit by a mini truck near the RTO square. Under the impact, the two-wheeler rammed into a MUV while the mini-truck hit another wheat-laden truck, which crashed into a tree.

While vehicle registration was found to have been blackened on the front of the mini truck and a wrong plate was attached at the rear. Police apprehended Chitta Nayak, based on the complaint of Srikant’s family members, near Therubali in Rayagada. He had got himself admitted to Bhima Bhoi Medical College and Hospital feigning injury after the accident and was attempting to flee to Visakhapatnam on the pretext of undergoing treatment there.

Sources said the accused’s target was Sanu, who had left home with Srikant on a motorcycle after receiving a call. A mini-truck started to trail him after he crossed Chitta’s house.

According to Sanu’s family members, Chitta had been forcing them to sell a piece of land and had also threatened to kill them. Sanu’s brother Bhuban Nayak has a close shave when the accused tried to kill him in a similar manner last week. The matter, however, was not reported to police.

Chitta was allegedly a member of a tender fixing and land grabbing gang and was lying low since his partner Raju Nag was gunned down five years back, sources said.

“The hit and run case was a pre-planned murder and Chitta is the prime accused. He has hatched the conspiracy to eliminate Sanu Nayak’s family to grab their prime land. Three persons, including Chitta, are involved in the murder. There were two persons in the mini-truck and a probe is on to ascertain who was driving the vehicle,” informed Balangir SP Kusalkar Nitin Dagdu.

He said that CCTV footage and technical analysis would help to identify the driver.