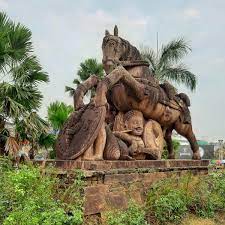 Bhubaneswar: Congress MLA Suresh Routray on Thursday threatened to launch an agitation if the iconic warrior-horse replica is shifted from Master Canteen Square in the Odisha capital.

The replica of the sculpture of a warrior and horse will be shifted to Raj Bhawan Square as part of a Smart City project in Bhubaneswar.

“The statue is in the heart of the city facing the secretariat, assembly and railway station. This is the most appropriate place for it, considering the fact that it symbolises Kalinga and the sacrifices made by our people during the Kalinga war. Congress and people of Bhubaneswar strongly oppose this move,” he said while standing on the pedestal on which the replica is placed.

The Bhubaneswar Smart City Limited (BSCL) had proposed relocation of the sculpture, which has been an identity of the state capital ever since it was erected in 1988, for the Rs 80-crore Smart Janpath project.

The Director of Culture, Ranjan Das, had also approved the proposal to shift the statue at a recent meeting.

According to Culture Department sources, the replica sculpture along with other statues around Master Canteen Square will be shifted to the roundabout in front of Raj Bhawan and placed adjacent to the statue of Utkal Gourab Madhusudan Das.

The Culture Director said the statue will lose its visibility, as well as significance as the widening of roads and construction of a multi-modal hub, has been planned on Janpath under the Smart City project.

“That is why it was decided to shift it to the vicinity of Governor House where it would get proper visibility. Another reason to shift it near the statue of Madhu Babu was his connection with the black horse and State emblem,” Das was quoted as saying by the New Indian Express.

As per the plan, the Bhubaneswar Development Authority (BDA) is given the responsibility of shifting all the sculptures to the new location. BDA will also bear all the expenses towards shifting the sculptures.

Das informed that the statue could have become brittle over the years and the BDA has been asked to engage experts for its shifting.

The original warrior and horse sculpture is found at one of the gates of Konark temple.

The Odisha government had adopted it as the official emblem and placed it at the centre of its logo.