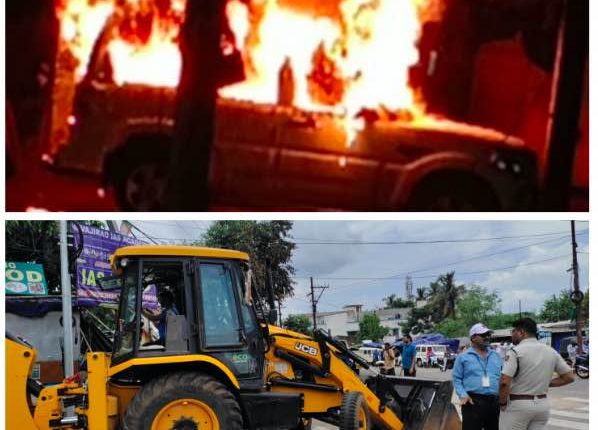 Bhubaneswar: A day after an SUV was set ablaze following a group clash, the Commissionerate Police on Tuesday demolished several shops set up illegally on government land at Delta Square in Odisha capital with the help of Bhubaneswar Municipal Corporation.

Four persons involved in the incident have also been arrested. They have been identified as the driver of the vehicle Biswajit Rout alias Bapi, his brother Susil Rout and Raju Pradhan and Sudhir Barik, who owned a fast food stall there.

According to sources, a clash between two groups over an alleged monetary dispute took an ugly turn when eight to 10 persons ransacked and torched an SUV parked at the spot. In the video, which has gone viral, the miscreants can be seen creating a ruckus on the road before torching the SUV.

“Monetary dispute between two groups triggered the group clash. We have arrested four persons and others involved in the case have also been. Their illegal business establishments on the government land have been pulled down,” said a senior police officer.

A manhunt has been launched to nab other miscreants, the officer added.

The SUV was reduced to ashes in 20 minutes before firefighters could reach the spot. The petrol tank also exploded creating panic in the area, the sources added.

Yoga In Water: ODRAF Jawans Show How To Do It In Bhubaneswar