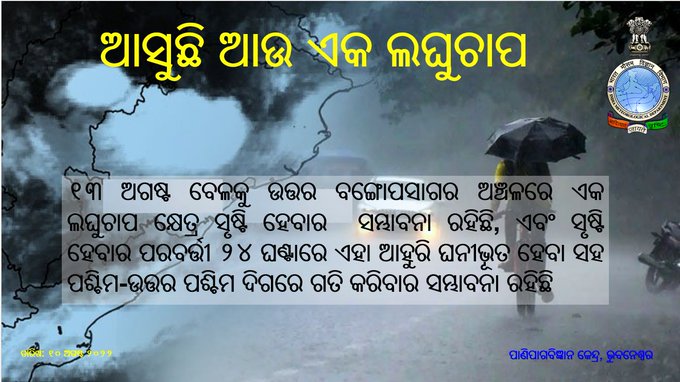 Bhubaneswar: While the depression has weakened into a well-marked low pressure over Chhattisgarh and adjoining east Madhya Pradesh, the Bhubaneswar Meteorological Department (IMD) on Wednesday informed about the formation of a fresh low pressure over the north Bay of Bengal around August 13.

The system is likely to intensify in the subsequent 24 hours and move west-north-west direction, it added.

Earlier in the day, senior meteorologist of the IMD here Umasankar Das said there will be a decrease in the intensity of rainfall on August 11-12, which is likely to increase again from August 13 under the influence of an active Southwest Monsoon.

Notably, nine districts of the state are under orange alert during the next 24 hours while yellow warning for heavy rainfall has been issued for 10 districts. Heavy to very heavy rainfall (7 to 20cm) is likely to occur at isolated places in Nabarangpur, Nuapada, Kalahandi, Bolangir, Kandhamal and Ganjam with heavy rainfall very likely at one or two places in Malkangiri, Koraput, Nayagarh, Khordha, Puri, Cuttack, Boudh, Bargarh, Sonepur, Sambalpur, and Jharsuguda on August 13, the MeT office had said.