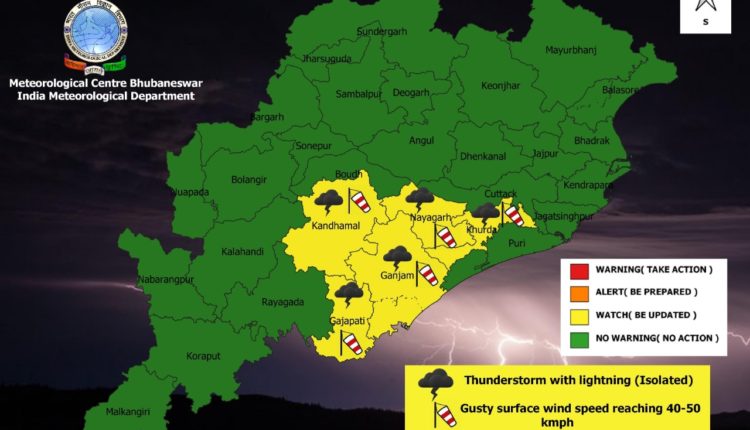 Bhubaneswar: The regional centre of India Meteorological Department on Friday issued yellow warning, light to moderate rain with thunderstorm and lightning, for the districts of coastal and interior districts of Odisha in the next 24 hours.

The Met Office has predicted light to moderate rain and thunderstorm with lightning at one or two places for 5 Odisha districts of Gajapati, Ganjam, Kandhamal, Khurda and Nayagarh.

The warning has also been issued for the districts of Cuttack, Dhenkanal, Jajpur, Bhadrak, Kendrapada, Balasore, Mayurbhanj, Ganjam, Nayagarh, Khurda and
Jagatsinghpur till 8.30 am on April 4.

The weather impact will also be felt in the districts of Rayagada, Gajapati, Ganjam, Mayurbhanj, Balasore, Jajpur, Bhadrak and Kendrapada till April 5 morning.

Meanwhile, the Special Relief Commissioner has issued a warning asking the district collectors to circulate warning message among the people.

For Bhubaneswar, the Met has predicted partly cloudy sky with possibility of moderate rain or thunderstorm. The maximum and minimum temperature is very likely to be around 38 degree Celsius and 24 degree Celsius respectively.

Diversity & Inclusion In Workplace Among Challenges In Post-Pandemic World