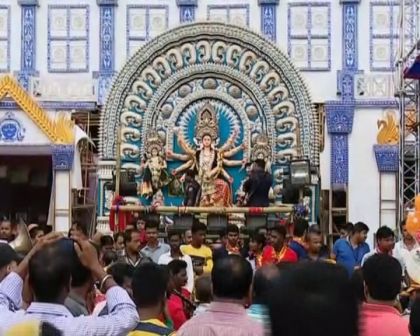 Cuttack/Bhubaneswar: With the conclusion of Maha Dasami, the process for the immersion of idols of the Goddess in the twin cities of Cuttack and Bhubaneswar on Wednesday.

In Cuttack, the ceremony began last night soon after the Maha Dasami puja. Till reports last came in, 11 idols of the goddess had been immersed in a temporary pond near the Devigada ghat by 10 am this morning.

As decided, the medhas of the Goddess after the sahi parikrama (the idols taken on a procession through different lanes in the city) will be taken to Devigada ghat via Gourishankar Park.

To keep a strict vigil on the anti-social elements, the Commissionerate Police have set up 40 temporary outposts and installed CCTV cameras at various locations with the deployment of 57 platoons of the armed police force and two units of Rapid Action Force (RAF) personnel.

The procession will begin at 11 am.

For smooth conduct of the procession, the Commissionerate Police have made alternative traffic arrangements to regulate the movement of vehicles.

For the immersion of the idols, temporary ponds have been erected on the banks of Kuakhai river and Daya river.

In Rourkela, 20 platoons of police force have been deployed and six DSPs and 14 Inspectors engaged to monitor the security arrangements.