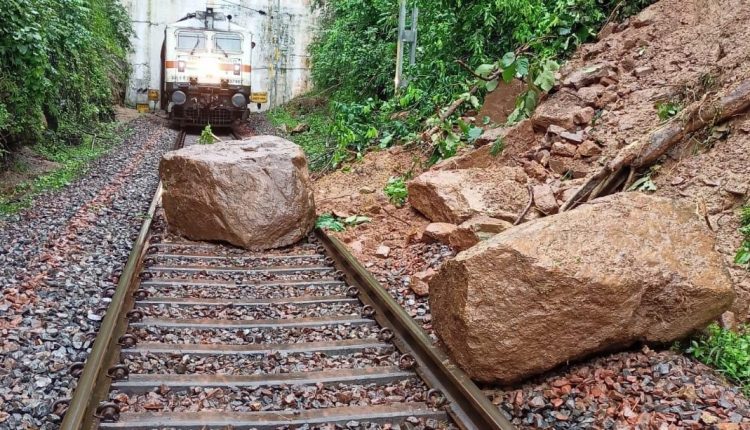 Rayagada: Train services on Koraput-Rayagada (KR) railway line were disrupted due to landslide caused by heavy rain in Odisha’s Rayagada district on Sunday.

According to sources, heavy boulders came crashing down on the train tracks at tunnel 34 near Andupadu under Sesakhal panchayat. The spot is located between Keutaguda and Sikarpai railway stations connecting Rayagada with Koraput. 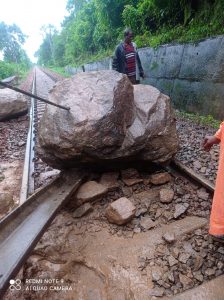 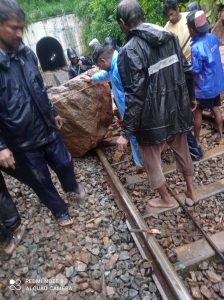 Due to the landslide, Howrah-Jagdalpur Samaleswari Express and Koraput-Visakhapatnam DMU trains were detained at Sikarpai station. The DMU train returned to Koraput after halting at the station for more than 3 hours. 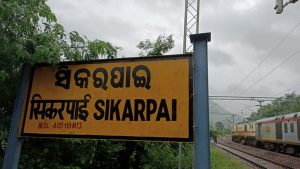 However, Samaleswari Express resumed journey almost 6 hours after detention at the station. The train left for Howrah after a special Railway team arrived at the spot from Rayagada and cleared the tracks.

Meanwhile,  three major rivers in the district are in a spate with their water level rising constantly. Bansadhara river has crossed warning mark at Gunupur. The river was flowing at 83.29 metre, while the warning mark was 83 metre and danger mark at 84 metre.

Due to heavy and continuous rain in the upper catchment areas of Bansadhara in Chandrapur, Muniguda and Gudari, the water level has been steadily rising.

Similarly, Nagabali and Jhanjabati rivers are in a spate. In the absence of mechanism to measure water level of the two rivers, the district administration was alerting the people in low-lying areas through public announcement systems.

According to local Met office, as any as 11 blocks in the district have been receiving continuous rainfall, affecting normal life, since last night. Highest rainfall of 74.3 mm in the district was recorded in Chandrapur block, 46 mm in Gunupur, 25.2 mm in Rayagada, 31.2 in Kolnara, 46.4 mm in Kalyansinghpur, 59 mm in Kasipur, 46.4 mm in Padmapur, 57 mm in Gudari, 51.4 mm in Ramanaguda, 24.2 in Bisamakatak and 45.3 mm in Muniguda.