Malkangiri: Incessant rainfall in Odisha’s Malkangiri district over the last three days has led to a flood-like situation, inundating bridges and roads and disrupting road traffic with neighbouring Chhattisgarh, Andhra Pradesh and Telangana.

The bridge passing through MV 96 village has been submerged following heavy rainfall. District administration officials are closely monitoring the situation. With the bridge submerged, hundreds of vehicles are stranded.

A swollen Godavari River following incessant rainfall in Andhra Pradesh has only worsened the situation in Malkangiri district. If the Godavari swells further near Motu in Malkangiri district, it is likely to cause flooding in the area. The situation is being monitored by the Kalimela BDO, Motu tehsildar and other district administration officials.

After heavy rains, uprooted trees blocked roads in Govindpalli but were later cleared. 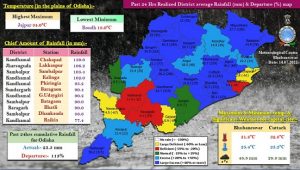 Seasonal cumulative rainfall realized between 1st June to 14th July 2022 is 341.1mm against its normal value of 345.5mm. During the period 6 districts received excess rainfall, 7 districts in deficient & rest 17 in normal category. pic.twitter.com/NGMC2MXr1i