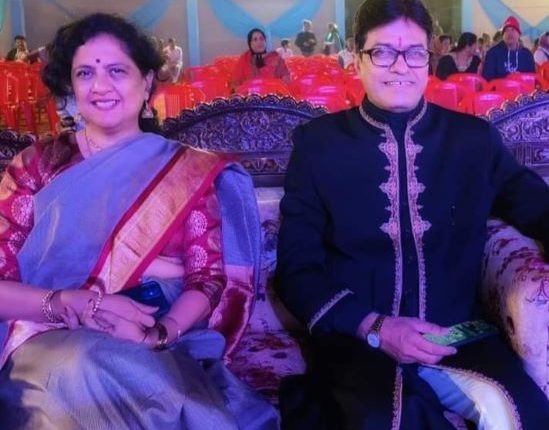 Berhampur: Claimed as India’s first anchor couple, they have transformed the anchoring into an art. They have been introducing renowned artists and personalities on stage for the last 30 years. Meet Hrushikesh and Sudipta Panigrahi of Berhampur in Odisha’s Ganjam district.

Hrushikesh and Sudipta have been working in perfect harmony with very rare overlapping or intrusion since Konark Dance and Music Festival in 1993. Staying at Ashok Nagar-10 in Berhampur, the couple have carved a niche for themselves as an anchoring team and emerged as pioneers in this arena.

The innovative style, sonorous voice and impeccable Odia of Hrushikesh along with Sudipta’s precise and spontaneous narration in English make the couple most sought after anchor duo. They have infused a touch of professionalism in their quest for perfection and rhythmic cadence which was hitherto non-existent in anchoring in Odisha.

“When we started anchoring in state-level functions in 1993, there were no married couple as anchors in the country. It has been a fulfilling journey for both of us as we feel proud to have tried to bring a sense of professionalism to the work,” said the couple, who have left the audience mesmerised with their impeccable skills.

“If you have to reach out to the audience, you have to cultivate your own style. A deep insight into our rich and varied culture and command over the language is the prerequisite to success,” they said.