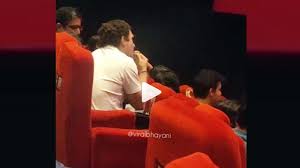 New Delhi: A resident who went to watch Article 15 at PVR Chanakya on Wednesday evening made headlines for behaving like a common citizen.

This was, in fact, not just another resident. The guest was Rahul Gandhi and he had just quit as Congress president that day. NDTV reports that a video of Rahul watching the movie has gone viral on social media platform Instagram, where he was also praised for not behaving as a VIP.

In the video, Rahul is seen interacting with a person sitting next to him and also having some popcorn.

Farmer’s Aid Under PM Kisan Yojana Should Be At Par With KALIA: Naveen