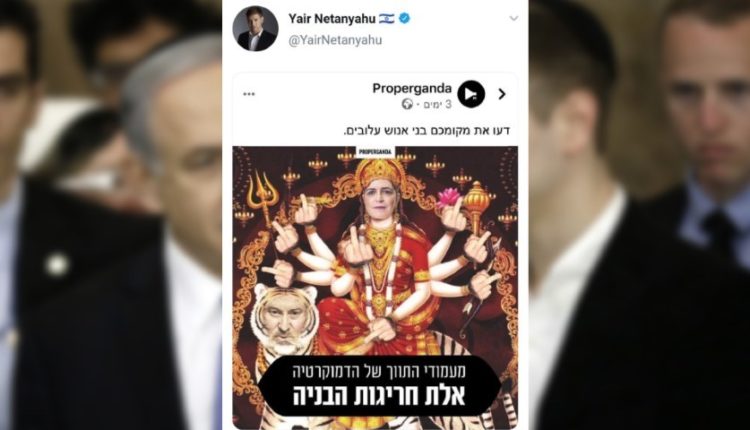 Jerusalem: Israeli PM Benjamin Netanyahu’s son Yair Netanyahu who drew flak from Hindu Twitteratis for his tweet depicting Goddess Durga with the face of Liat Ben Ari, the prosecutor in his father’s corruption cases, has now tendered an apology.

Yair, 29, who is very active on social media claimed to have no knowledge that the tweet depicted the image of Goddess Durga. “I’ve tweeted a meme from a satirical page, criticising political figures in Israel. I didn’t realise the meme also portrayed an image connected to the majestic Hindu faith. As soon as I realised it from the comments of our Indian friends, I have removed the tweet. I apologise,” Yair said in a tweet.

The image depicted a morphed photo of Goddess Durga with prosecutor Liat Ben Ari’s face and the Attorney General, Avichai Mandelbit’s face replacing the face of the tiger, with each arm of the morphed image ending in a ‘middle finger’. The caption said, “Know your place, you despicable people.”

People were split in their opinions. Some expressed discontent on the irresponsive behaviour and others gave Yair the benefit of doubt and commended him for being responsible and apologising for his action.