FeaturedBhubaneswar
By OB Bureau On Nov 14, 2021 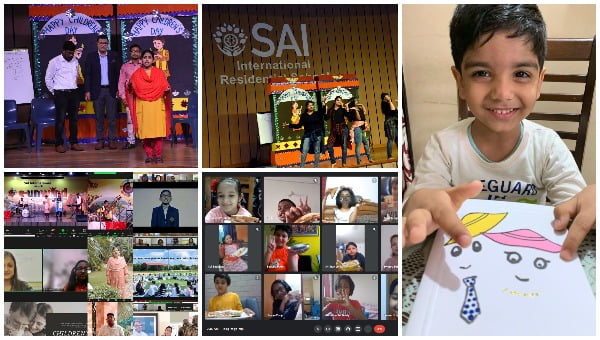 Bhubaneswar: When six-year-old Janhvi Rout was participating in her school’s online dance competition to observe Children’s Day this year, her doctor mother—Jayshree Suchandran—had some tough tasks to perform.

Keeping the kid glued to the act and not letting her give up midway was the first one. Secondly, she also had to ensure that the little one got the moves correct and didn’t pick up the gadget to type a ton of gibberish in her work-related messaging groups.

As parents say, this Children’s Day has been one of the toughest for them in Odisha’s Bhubaneswar, where most of the schools conducted virtual celebrations to commemorate the birth anniversary of India’s first Prime Minister Jawaharlal Nehru on November 14. In fact, the majority of parents said about 90 per cent of the activities required their participation. Despite hiccups, glitches or hurdles, the teachers, students and schools managed to perform a plethora of activities on the day and get those live-streamed for others.

Not everything was online though! Some schools adopted the hybrid model to keep the fun alive amid the super-challenging pandemic. For instance, at SAI International School, there were both online and offline programmes. “We had online programmes, in which teachers performed for students from playgroup to Class XII. At the same time, offline events were held for the students (Class VIII onwards) of the residential schools. The teachers performed skits, songs and dance, which were also live-streamed for other students of the school,” said Silpi Sahoo, chairperson of SAI International School.

Similar model was followed by Narayana School. “After taking permission from the parents, the school organised an offline event with only 10 children from the senior classes on its premises. About 200 to 300 children joined the programme online. The events and the cake-cutting ceremony were live-streamed,” said Subhrajit Mohanty, whose child is also a student of Narayana School.

Though each class teacher at Happy Hours School was asked to conduct online events for the kids using the school’s customised portal, the students received real gifts. “The parents were asked to come and collect the gifts from the school. Each child was given story books. Besides, we hosted online competitions for them,” said Nidhi Dhawan, principal of Happy Hours School. Not just schools, greetings poured in from parents as well. Members of Organisation of Parents’ Associations Forum (OPAF) took to social media to share virtual greetings to all children in the country. Fancy dress and quiz were the most sought after online events for the schools. “We used the occasion to enlighten the kids with knowledge on various topics, often not covered in school curriculum. So, we hosted a quiz online,” Madhumita Sahoo, principal of Guru Nanak English Medium School, said.

A social organisation, Robin Hood Army Bhubaneswar, organised a reel-making competition for children on Instagram. Each participant had to create an Insta reel on the topic ‘What does Childrens’ Day mean to you?’