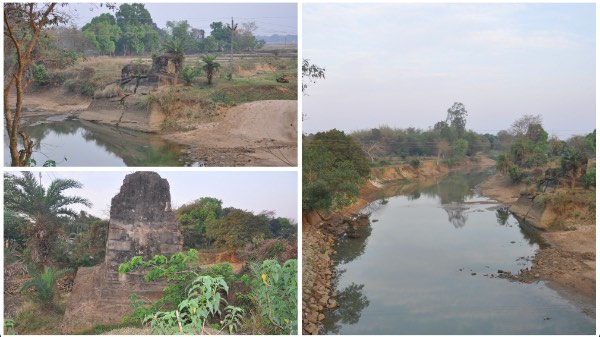 Bhubaneswar: Concerns are being raised over the safety of suspension bridges after the cables of the British-era bridge over Machchhu river in Gujarat’s Morbi snapped, sending people crashing into the river below, last evening. Over 140 lives were lost while several others are feared missing. Following the incident, the Cuttack district administration on Monday capped the pedestrian limit on the Dhabaleswar hanging bridge at 200 and shut it for a day to assess its stability and check any weaknesses that may pose threat to the people using it.

The Jhinjhir Polo over the Jalaka river, however, was the first suspension bridge in eastern India. It was on the Old Jagannath Sadak, in Mathani village near Basta. Just 750 metres off from the present highway,  the remains of the once grand bridge can still be seen.

Completed in 1905, it was constructed on the lines of the Hanging Bridge of Punalur, Kerala, which had been designed by the  Scottish Engineer Albert Henry in 1897. The Jhinjhir Polo was situated on a bend of the turbulent Jalaka river near the Mathani village. It was based on English Engineer Brunel’s original design and was an engineering marvel of its time. It was named Jhinjhir because of the supporting iron chains that hung from the stay cables. Today only the remains of the two towers on either bank can be seen.

The Jalaka was a turbulent river for most of the year, and crossing it was dangerous. A wooden bridge that was in place used to get washed away frequently. The pilgrims of the Jagannath Sadak used to be held up at both ends for days. The suspension bridge was chosen as setting up a pier would have been difficult in the soft clayey bed.

The remains of the old bridge were discovered by Intach’s Anil Dhir when he surveyed the Old Jagannath Sadak in 2010. Hidden in overgrowth, the team cleared the vegetation and the two ruined towers emerged.

There are many legends attached to the Jhinjhir Polo. The old folk of the village say that people were afraid to cross the bridge as it swayed. The pack animals, both bullocks and horses were reluctant to cross it because it was unstable. The animals had to be coaxed across. Local lore has it that after the bridge was completed, four elephants were made to criss-cross the bridge for a full day to test its strength.

The two towers at either end bore the weight of the bridge. The deck of the bridge was initially made of thick wooden planks which were supported by suspension chains attached to two multi-stranded cables. The chains were bolted with huge nuts and steel hangers joined the chains to the deck.

The suspension bridge got washed away during a flash flood in July 1928. Some of the villagers in the nearby hamlets still have pieces of the original chains that were used in the bridge. A new arched bridge was built slightly upstream in 1930, which is still in use.

Dhir says that the old plaque which was installed in the left tower had indecipherable writing on it. It has since disappeared. The twin towers of the bridge were of non-cement construction, made of stone blocks, bricks and lime masonry. The towers still stand at the two ends, however, the fast-flowing river has made then bend backwards. Both towers are in a condition of acute distress. The right bank tower is crackled in two places and may disintegrate in the fast-flowing river.  The left tower is totally engulfed by a banyan tree.  The foundations of both towers have been revealed by the erosion of the river bed.

The remains of this forgotten historical bridge in one small corner of Odisha should be properly preserved. The bridge had been listed and documented in the report made by Intach. In fact, there are 27 bridges of the Old Jagannath Sadak which are still in use. The oldest at Jaleswar was recently demolished in spite of protests. The bridges of the Old Jagannath Sadak are engineering marvels which have survived the ravages of time and like other monuments are testimony of the engineering skills of early times.