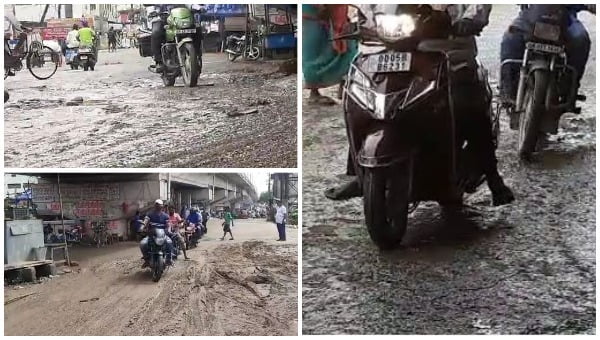 Cuttack: A little rain or a drizzle is adequate to jeopardise traffic on Nuabazar road in this millenium city with its inumerable potholes making life for road-users miserable.

Heavy as well as light vehicles commute on this busy road under the flyover much to the chagrin of pedestrians and cyclists. This road connects Jobra, Press Chak, Nuapada, OMP, Paradip and the National Highway. But lack of proper maintainance and care for the road has caused several accidents on a daily basis.

People have expressed resentment over the callousness of officials about the safety of commuters using this main road in the city. Rajiv Behera, a resident, has said incessant rain has worsened the road condition. Students, traders and office-goers find it difficult to cross the road patch as contractors who had taken up repair work under JICA project have left things to their fate because of rains.

“The company authorities have ignored several complaints from people. And people would be forced to take up agitational methods due to the indifference of the authorities,” he added.

According to Jyotirmaya Sahu, a student, the state government must intervene to complete the drain repair work launched by JIACA authorities. “Otherwise, things would deteriorate to misery ultimately,’’ he regretted.