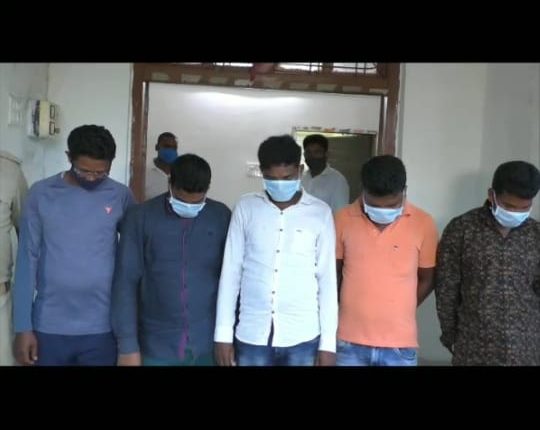 Malkangiri: Five persons, including a journalist, have been arrested for allegedly robbing a government official of Rs 8 lakh in Mathili block of Odisha’s Malkangiri district.

According to police sources, Nag, who working as a collection agent under the Mathili Soil Conservation Office, had collected a total of Rs 8.71 lakh from hundred of beneficiaries in the block for the supply of saplings, fertilizers, seed, agricultural machinery, and other materials.

Assistant Director at Mathili Soil Conservation Office, Pramod Kumar Behera, had directed Nag to deposit the amount at the office. It was to be deposited in a bank.

He, however, plotted a loot with four others, who barged into the office while he was handing over the amount to Behera at around 8 pm on Wednesday and threatened them with sharp weapons. They then snatched the cash and sped away on their motorcycles.

Following the incident, Behera lodged a complaint at Mathili Police Station. The investigation by Mathili IIC Raghunath Majhi revealed the involvement of Nag in the loot and he later identified the four others, who were nabbed following raids on Patraput, Chalulamendhi and Mendukuli villages.

The loot amount along with motorcycles and mobile phones was recovered from them, police added.