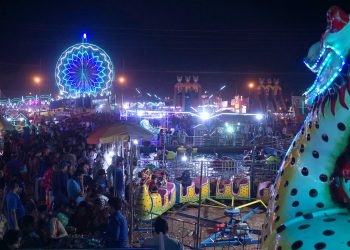 Bhubaneswar: Like its more famous counterpart in Cuttack, Bali Jatra in Bhubaneswar has also started with much fanfare by drawing thousands of people to the fair ground every evening.

The city denizens too are thronging to Bali Jatra to celebrate Chhadakhai as well as gorge on various delicacies like poda mutton of Keonjhar, prawn, crab and fish at the fair held on the Kuakhai riverbank near Jaripatana.

“Though there are around 100 food stalls at the fair, those selling non-veg items are drawing the maximum crowds,” said a vendor.

A melody group from Kolkata and the students of Jayadev Sikhsha Kendra also enthralled visitors to the fair on Thursday evening.

For safety purposes, the administration had not given permission to install Ram Doli on the first day. Later, it gave the go ahead and now this particular joyride has turned out to be one of the major attractions, the working president of Bhubaneswar Bali Jatra Committee, Jeevan Kumar Badu, said.

On the aspect of safety and security, Badu informed that the committee has deployed volunteers at several places to assist the police forces on the fair ground. Besides, 30 CCTV cameras were installed at strategic places to monitor the crowds.

All the traders have been instructed not to use polythene to make the fair plastic-free.

The committee is also checking the quality of the food served to the people at the stalls, informed committee secretary Tapan Kumar Baliarsingh.

Why Bali Jatra In Bhubaneswar?

To avoid the rush at Bali Jatra in Cuttack, some people had planned to organise a similar fair on the Kuakhai riverbank near Patiabandha at Jaripatana in the Odisha capital in 2017, according to Bhubaneswar Bali Jatra Committee founder member Abhaya Badajena.

Initially, Bali Jatra in Bhubaneswar started with 30 stalls in 2017.  Now, the number of stalls has gone up to 500, speaking volumes of the success of this fair.