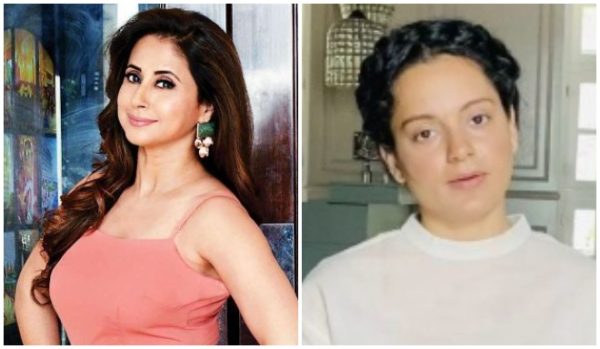 Kangana said this in reaction an earlier interview by Urmila where the Rangeela actor had questioned Kangana’s motives in raking up the Bollywood drugs angle in .

During an interview with Times Now, Kangana said, “I saw one very derogatory interview given by Urmila Matondkar. The way she was talking about me, pulling faces, making a mockery about my struggles, attacking me on the fact that I am trying to appease BJP for a ticket. One doesn’t have to be a genius to figure out that it is not very difficult to get a ticket. Urmila is a soft porn star. She is not known for her acting for sure, what is she known for? For doing soft porns right. If she could get a ticket, why wouldn’t I get a ticket?”

Earlier, Urmila had objected to Kangana saying that 99 per cent of the film industry was into drugs. The veteran actress pointed out Kangana’s hometown Himachal is one of the biggest origins of drugs and that her worries about drugs should start from her own state.

“Everything that you have got today, the name, the fame and the money, is all thanks to Mumbai and the film industry. Why is it that you have not spoken about these things in the last so many years and are speaking about all this only in the last few months? The timing seems funny. Everything seems to be going a bit berserk,” Urmila added.

Anubhav Sinha tweeted, “Just felt like saying this to one of the most beautiful, elegant, evocative, expressive actresses ever. Sending you love @UrmilaMatondkar”.

Just felt like saying this to one of the most beautiful, elegant, evocative, expressive actresses ever. Sending you love @UrmilaMatondkar

In 2019, Urmila had resigned from the Indian National Congress, just 5 months after joining. She cited the party’s inaction and “petty in-house politics” for quitting.

A Few Past Confessions From Bollywood On Drug Addiction

Is Rs 2.5 Lakh Too Expensive For Hrithik Roshan, Asks His…