Karnataka Students Made To Wear Cartons For Exams; Know Why 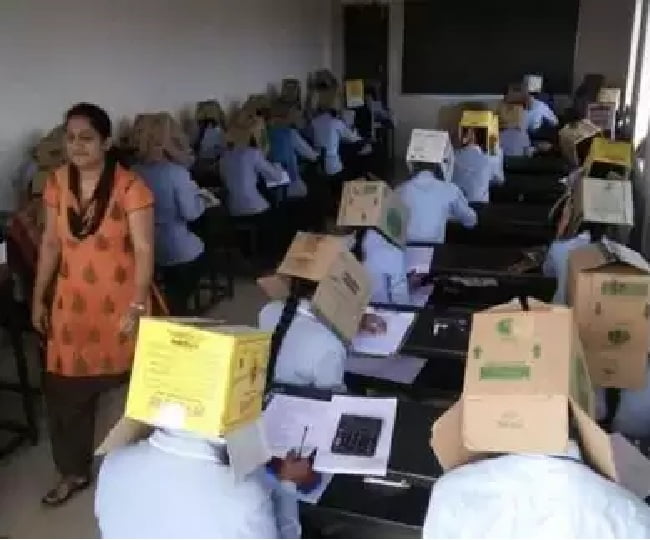 Bengaluru: The Bhagat PU College in Haveri, Karnataka has invited the ire of both academics and the government for coming out with an ‘out of the box’ solution to check cheating in exams.

On October 16, the first-year students who arrived for their mid-term exam were taken aback on being handed modified cartons to cover their heads. The cartons were tailored in a fashion that made the examinees only look at their answer scripts.

The experiment triggered an instant outrage on social media. The Karnataka government swung into immediate action as the WhatsApp message posted by the college went viral.

According to news reports, the deputy director of Pre-University Education, SC Peerzade, rushed to the campus and directed the authorities to remove the boxes. A showcase notice has been issued, Peerzada said.

“When I went to college, most of the students had cartons over their heads. I sought an explanation from the administrator. To my shock, the deputy director of the college, MB Sateesh, told me that he was just experimenting with what he had seen in a Bihar college,” he said.

The media quoted Sateesh as saying that the consent of the students was taken before implementing the idea. “We implemented this idea to curb malpractice and not to harass students. This is just an experiment,” he said.

Peerzada, however, said he has advised the students to alert the department when such measures are imposed, terming the practice as “inhuman”.

Vaccine For Children: Covaxin May Be Approved By Sept, Says AIIMS Chief