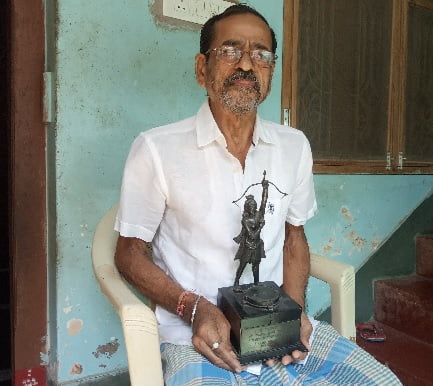 Berhampur: The sports activities have received an unprecedented fillip under the current regime in the state. From world cup hockey to paralympics, the government’s patronisation has been overwhelming. On the flip side, an Arjuna awardee and five-time national champion in weightlifting leads life in penury without having a house of his own in Berhampur.

Bijay Kumar Satapathy has a long list of medals and awards that he won during his prime time in late 1970s and early 1980s. He was the National Champion in weightlifting for five consecutive years from 1977-78 to 1982-83 and was adjudged the Best Weightlifter of India at Cochin in Kerala in 1981-82.

He bagged second position in 1980-81 Commonwealth Games (CWG) in Auckland, New Zealand and won bronze medal in Asian Championship held at Nagoya in Japan in 1981-82. He also bagged the gold medal in 1981 Mini Commonwealth Games held at Brisbane Australia, silver medal in 1982 CWG at Brisbane and came third in 1983 Asian Championship held at Damascus in Syria.

In recognition of his achievements as weightlifter, the then President Gyani Jail Singh had conferred the coveted Arjuna Award on him in 1982.

“Receiving the Arjuna Award from the President was the happiest moment of my life as I consider it the last goal of a sportsperson. I had received the certificate, memento and Rs 5,00 at the time. I am still preserving the memento and the certificate,” said 68-year-old Satapathy who stays in his parental home at Somnath Nagar near Aska Road in Berhampur.

“I have also preserved all the medals I have won in various national and international events. But all those seems meaningless as very few people in Odisha including my native Berhampur town know about me,” he said.

He lives with wife Sabitarani and two sons Jagannath (35) and Somnath (32) with a meagre income. “Somnath was very interested in weightlifting but how can I manage his special diet and training,” he said.

He said he had approached the state government several times to get a house plot or some incentive. “I was really disappointed when my application form went missing in the Department of Sports a few days after I submitted it”, he added. What pains him most is that the state government has not bothered to meet him even once so far.

Satapathy started weightlifting when he was a student of Municipal High School, Aska Road in 1968  and joined Veer Hanuman Circus and Physical Institute in 1970. He joined the Indian Navy as a Leading Electrical Mechanic Power (LEMP) in sports quota in 1974 and continued in the job for 10 years. He then joined the Indian Railway as a Guard in 1985 and took VRS in 2009 after serving for over 24 years.

“Bijay Kumar Satapathy is the pride of Berhampur as well as Odisha. The state government must reward him for the service he has rendered,” said Ramesh Padhi, joint secretary of the Orissa Weightlifting Association (OWA), national and international referee.

Compared to Satapathy, another weightlifter from Berhampur Katulu Ravi Kumar, who received the Arjuna Award in 2011, has been appointed as DSP in Odisha Police.