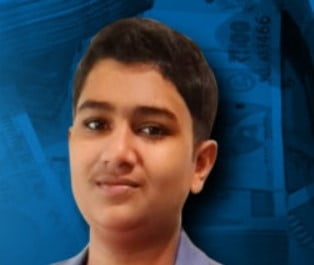 Bhubaneswar: “I am a school student. I earned more than Rs 1 crore in just 9 months.” It sounds like an alluring advertisement to draw attention of jobless people that one comes across on different media. But it is not. Read on to know how an Odia boy truly did it.

The impossible sounding feat was achieved by Ayusman Panigrahi from Gudipada in Balasore district. A brilliant student of Class IX of St Thomas Convent School in Balasore town, Ayusman is also a good singer.

While singing for programmes in TV channels, Ayusman came in contact with musicians Snatanu Nayak, Guduli Rath and Sundar Ray. He also knew about online crowd marketing from them.

Motivated by the success stories of crowd marketing, Ayusman made some research about it in the internet. He knew the best companies in online markets and the procedures from different sites.

Finally, he took Rs 9,000 on loan from his parents and became a member of Dubai-based crowd marketing company. He started using his personal connections and recommend them to become customers, members and entrepreneurs of the company.

In the process, Ayusman earned bonuses and also kept the chain expanding. He has already enrolled 4,500 people in his chain.

During 9 months since he become the member in December last year, Ayusman has earned more than Rs 1 crore as bonus from the company.

Ayusman, who has gifted two SUVs from the money to his parents, aims to be a successful businessman in future.