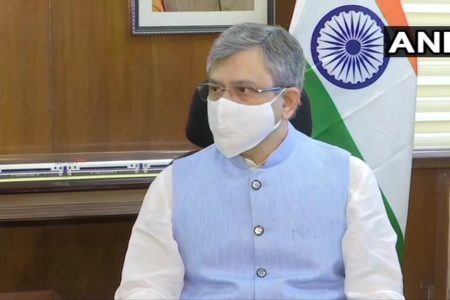 Bhubaneswar: Railway Minister Ashwini Vaishnaw is scheduled to visit Jharsuguda on Monday to review the ongoing projects and initiate necessary steps for their expeditious completion.

According to the itinerary, Vaishnaw will reach Jharsuguda around 5 pm on November 8. From the airport he will leave take the road to Circuit House where he will conduct a meeting on the issues of South Eastern Railway and East Coast Railway besides issues related to Jharsuguda and Bondamunda areas.

On November 9, Vaishnaw will be holding an organisational meeting from 10.30 am to 4.30 pm and then leave for Delhi.

This will be Vaishnaw’s second visit to Odisha after being inducted into Modi 2.0 Cabinet. He was in the state on a four-day visit in August and had embarked on the BJP’s ‘Jan Ashirwad Yatra’.

He travelled to Rayagada in a train and later visited Koraput, Nabarangpur, Kalahandi and Balangir for the party’s programme.