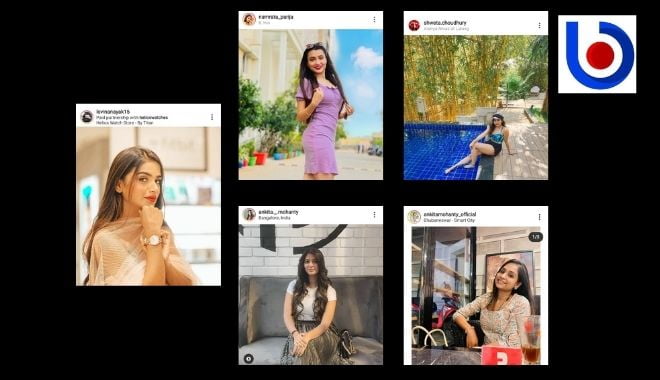 Bhubaneswar: Vlogging is the new way to express yourself. But did you know that it’s a full-time career for some people here?

Amongst vloggers, fashion is one of the hottest subjects in demand. And some of them get more views than even celebrities.

How do they earn, what brands approach them and are their real life as glamourous as they show in their reels?

Here are a few fashion influencers from Odisha who have made an impact:

Passionate about dancing and singing since her childhood, Namrata had a dream to pursue a career in acting. She started taking interest in dancing and modelling from a very young age. A great opportunity came her way when she got her biggest breakthrough with the TVF channel.

“Continuous hard work and dedication passing all the negativity is the only way I strived towards success,” she said.

Lovina, who claims to have started the blogging trend in Odisha, started her journey through Pinterest.

“Learn to love yourself and that is actually when the society will accept you. Never be scared of the judgement and remarks people will pass. Be you and be proud of who you are,” advises Lovina, hinting about the negative side of social media.

Apart from being a fashion influencer, she’s a co-owner of the Tummy Trucker food truck at Patia.

Shweta started fashion blogging as a hobby in college because there were very few digital creators in Odisha back then. Her passion helped her in getting 83K followers. Her forte is recreating everything inspired by pop culture. “The inspiration comes from TV shows, movies and everything I see around,” said Shweta, adding that she loves her hobby-turned-work.

“When you wake up in the morning and you know that you will enjoy your work, your job becomes fun,” said Shweta. Apart from Instagram, she is also an avid Pinterest user.

Bhanva credits her claim to fame to vlogger and roommate Shweta Choudhary. “My journey to becoming an influencer started because of Shweta, who was my roommate at the hostel. She pushed me towards this less taken road,” said Bhavna.

Initially, she used to post just photographs and then gradually pushed herself towards fashion blogging by posting her video contents on Instagram. She even stated that she used to DM different brands to collaborate with them. Later when PRs evolved, she got good opportunities after enrolling herself and even MNC’s approach them through this medium.

Talking about money, she explained, “The amount we charge differs from the type of content the brands need. If it is a feature, I charge around Rs 10,000. For videos, a bit higher.”

“Try being yourself and be mentally strong if you know you are right. Striving through all the criticism, my only answer is ignorance and that’s the best weapon,” stated Pramita.

She disclosed that she charges a minimum of Rs 12,000 for a single collaboration.

Always pushed that extra step by her parents, Ankita Mohanty (1) found a way in the fashion influencer list. Since her early schooling days, she participated in fashion shows, dance competitions, and beauty contests. Luckily, her parents were the backbone of her journey as a fashion influencer.

“Being a fashion influencer was something I eyed since childhood besides wanting to be a traveller,” said Ankita (1).

“When I was a child, I loved to sing! As my mother is a good singer, she had given me good training in music. I was also interested in anchoring and started nurturing my talent by performing in entertainment programs,” said Ankita (2).

She now owns a label named ‘The Ankkie’ and charges around Rs 20,000 for one show.

How Do They Earn?

Influencers are either paid in cash or barter system. Brands are known to give products in exchange for promotion. The rates vary according to the demand. As a simple rule, influencers are often paid around 10-15 per cent of their followers, explained Joyeeta Roy, Director of Signature Productions, a talent agency. “If an influencer has one lakh followers, he or she is paid around Rs 10,000 to Rs 15,000 per post. For videos, it is more like Rs 20,000 to Rs 25,000,” Joyeeta said.

She also explained that content creators are getting more views than celebrities. Newcomers typically get around Rs 3,000 to Rs 5,000 worth of barter for posts, and this is the minimum one can earn. She also explained it is a lucrative career and some top influencers can get 4-5 collaborations per month, and a post typically takes 2-3 hours of their time. She revealed H&M had given coupons worth Rs 25,000 to Rs 30,000 to some influencers when they launched their store here.