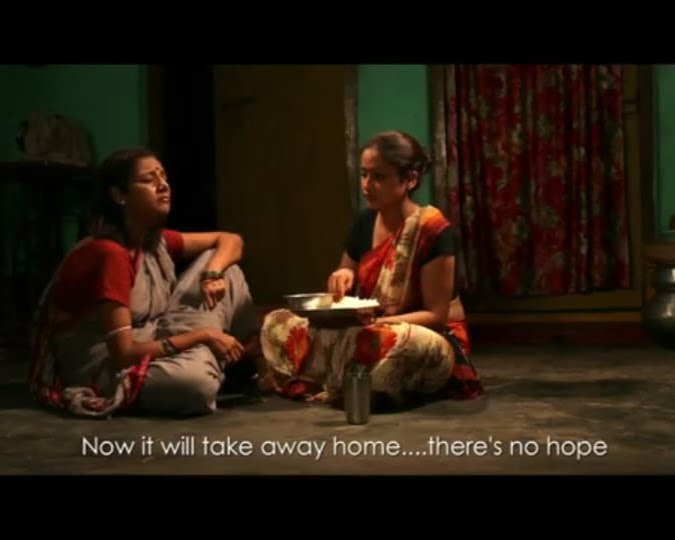 Kokoli Sukhua (dry fish) is a delicacy in Odisha, more so in South Odisha. The film, Kokoli, is an audacious attempt to bring climate emergency to the fore. With a powerful script, the film tries to weave three sub plots into one – personal, between Kokoli & Raju (the hero and the heroine), community (in the neighbourhood dealing with Kokoli’s unwed mother) and the social change (with the social change agents, Deepak and Sujata).

My friend, with whom I watched the movie, found one of the early scenes of a bitter spat between the mothers of Kokoli and Raju, quite appealing and ‘natural’. Presently, Odia film audience are hungry for ‘originality’ in their films. For such a script, the dialect, the costume, the setting and the mannerisms need to be closer to the ground. The scene’s cinematography is commendable. Raju’s mother is probably the best in the movie, with strong characterisation, dialogue delivery and sense of identification with the role. She has delivered what the role demanded.

The plot of the movie moves seamlessly between the three sub plots – individuals, families, community and the society at large, with climate emergency looming large and ominously.

The film could have been edited a bit more, shrinking the long conversations Kokoli has with the sea. Her ranting could have been shown as more powerfully brooding. That could have made the message even more hard hitting. Her mother’s dwelling in the past is repetitive and so are Kokoli’s helpless cries in the midst of a community, where not many people live (there are only a handful in all the frames).

The Collector’s meeting the motley crowd of a few community people is less inspiring and without any content. She should have spoken more about climate issues in place of Kokoli’s venting. The social workers’ presence is an intelligent move by the writer/director but instead of counselling the community, they spend more time lauding the culinary skills of Kokoli’s mother.

Kokoli’s role is well essayed. Her get up is quite urban, reflecting the changing mores of the Nolia society and its proximity to Puri. Nolia Sahi of Penthakota today has a few beauty parlours and the young girls are not shy anymore of make up or regular tending. I was glad to see that in the film.

If looks matter, then Kokoli and Raju look quite disparate – as if one is from Nolia Sahi and one from urban Odisha. Kokoli’s gait makes her more contemporary, and probably the director wanted that in her character. Girls are and need to be much more expressive in our society. She could be the Greta of Extinction Rebellion in Nolia Sahi.

The actress has pulled off the role brilliantly and she is promising. Her dialogues are more Odia than ‘Odia-with Ganjam/Telegu effect’, which is the language of Nolia Sahi. The dialogues demand more authenticity in the dialect and depth.

Raju’s friends are good, ‘real’ with their dialogues, albeit small roles.

With a powerful film like Kokoli, one would expect a reverberating background score, but it is forgettable. The pressures of a restrained budget, I assume, are well palpable. The film has won many international awards and is one of the best mainstream films on climate change in recent times and that too in a regional language.

I wish Snehasis and the team a bright, conscientious film career. Not many would dare to take up such an endeavour, which is relevant, topical and timely.

As I always exhort, Odisha and the east coast is under Climate Emergency. Let’s Act.

Kokoli is a precious mirror. Kudos to the entire team!

Let the brilliant young Odia filmmaker keep his creativity, conscience and dexterity intact and let him go global. We need to walk along with him.

Go and have a look!