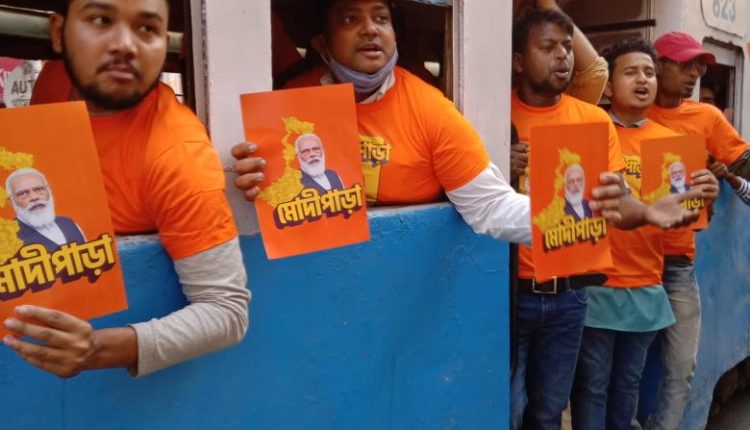 Kolkata: The BJP supporters on Tuesday not only ran on the city streets wearing saffron tees and carrying placards promoting Prime Minister Narendra Modi, but also took to the heritage tram to spread the message of Modi.

An initiative of Modipara, the volunteers in saffron colour tops could be seen boarding the tramcar and chanting ‘Jai Shree Ram’. The other compartment of the tram was left for normal passengers.

The BJP’s Delhi spokesperson Tajendra Pal Singh Bagga said, “The idea to board one of the cars of a tram came from the volunteers. Through the campaign, we are trying to educate people about the developmental works of Modi ji. We always take new initiatives to reach out to people.”

The tram ride from Esplanade to Gariahat, a stretch of 8 km, was covered by the volunteers who kept chanting slogans. Around 80 volunteers were vocal in their praise of the Prime Minister.

Bagga said the unique way to campaign was a hit with the people, who could be seen taking selfies and making videos of the event. “Tram is synonymous to Kolkata. We thought that through the initiative, we will not only promote our leader but also the identity of the city. We took just one of the two cars as we did not want to inconvenience the passengers who were waiting to board the tram,” said the spokesperson.

He added that the Prime Minister is the face of development. If other states can attract investment, why not in Bengal, he asked. “When Samsung came to India, they set up base in Uttar Pradesh, when Tesla came to India, they went to Karnataka. We are seeing how the youth from Bengal are migrating to other cities for jobs. We want Bengal to develop just as other states,” said Bagga.

The volunteers, who came to know of the initiative through the online promotion on social media, said they are not members of any political party. “These are normal people, without any party affiliation and joined the movement on their own after getting to know about it on social media. Many of the participants took an hour’s break to be part of the rally,” said one of the participants.

Earlier in the month, volunteers chanting ‘Jai Shri Ram’ were stopped by the police from entering Eco Park in North 24 Paragnas. Later, the group was allowed to enter after they stopped chanting the slogan.