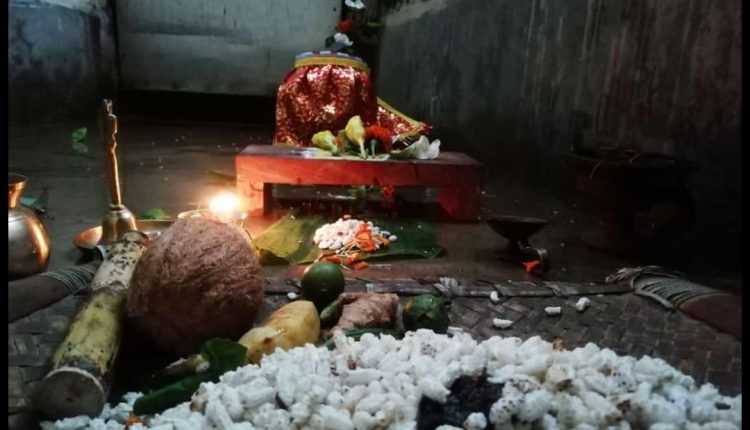 Bhubaneswar: Kumar Purnima, the much-awaited annual full-moon festival for the maidens is underway in Odisha.

On this day, unmarried girls take bath before sunrise, wear new clothes and worship Lord Kartikeya for an ideal husband. In the evening, they offer prasad to Moon God.

When Is It Celebrated?

Kumar Purnima is a harvest festival celebrated on the full moon day of the Hindu lunar month of Ashwin (September–October). It marks the end of the monsoon.

Why It Is Celebrated?

Kumar or Kartikeya, the handsome son of Lord Shiva and Goddess Parvati, was born on this day. He was very good looking and young girls always wished for a handsome husband like him. Therefore, the kumaris (maidens) celebrate this festival to get a good-looking husband like Kartika.

“We are a group of 30 friends here. We wake up early in the morning on this day. We have already performed the ‘Anjula Teka’ ritual. The ‘Chanda Puja’ will be held in the evening. We perform the rituals early in the evening to get a handsome husband,” said, Ashapriya Mulia, a resident of Cuttack.

The rituals begin very early in the morning when girls don new attires and offer ‘anjuli’ (palmful) to the rising Sun near Brundabati (Tulsi or Basil plant) seven times with ‘lia’ (a kind of grain) from the ‘kula’ (winnowing fan) and seven other items, including coconut, banana, apple, cucumber, betel nut, janhi (striped gourd), sugarcane and flowers.

“We woke up early in the morning and performed all the rituals. We offered ‘Anjula’ to the Sun God near ‘Tulasi Chauran’ at home. It’s ‘girls’ time’ today,” said Manisha Das, a resident of Bhubaneswar.

Evening ritual is almost the same as those performed in the morning except ‘Chanda Chakata’, which is offered to the moon.

The girls wait for the moon and raise the ‘Chanda Chakata’ to the moon. It is believed that if the girls see ‘Uila Janha’ (the fresh moon that has just risen on the horizon) and offer ‘Chanda Chakata’, they will get a young and attractive husband. Any delay would mean that they would end up with an old and senile groom.

The girls put prasad on a plate in the shape of a half-moon again near Brundabati, aptly decorated with colourful flowers and ‘diya’ and ‘dhupa’ (incense stick), and then offer it to the moon. It is then rolled out into fistful balls and savoured bringing an end to the rituals amid the sound of ‘huluhuli’ (ululation) and sankha (conch).

‘Puchi khela’ is a  signature of Kumara Purnima game played in squatting position while moving the balance of the body from one leg to another rapidly.  In villages, ‘Puchi’ competitions are held in the moonlight.

“Male members of families also participate in the celebration.  Young boys play Pasha (Chess). We have been playing cards in our houses for the last four days. Other indoor games and country games are also played on this occasion,” said Sarmishtha Padhi, a resident of Berhampur.

Sarmishtha said they decorate the house as well. “Earlier, there would ‘Bhajan Samarohs’, dance programmes and melodies in our city. We are missing them for the last two years due to COVID restrictions,” she added.

Goddess Laxmi Too Was Born Today

Kumar Purnima marks the beginning of the 11 days of Gajalaxmi Puja across the state. It is celebrated in Ganjam and Dhenkanal districts amid much fanfare. Many people worship the Goddess at their homes and play Pasha (Chess) and other indoor games all through the night. The significance: It is believed that those who wish to acquire wealth should always be vigilant at night.

Beginning Of the Holy Month Of Kartika

Kumara Purnima marks the end of the month of Ashwini in the Hindu calendar and the beginning of Kartika. During the entire month, people abstain from a non-vegetarian diet. Those who observe the special rituals associated with this month can only take a specific diet like ‘Habisa Dalma’ prepared using moong daal, colocasia, green raw banana, ‘oou’ and ghee, without turmeric once every day before dusk.

Car Owners For ‘Not Wearing Helmets’, Bikers For ‘No Seat Belts’: Where Are These Challans Issued?