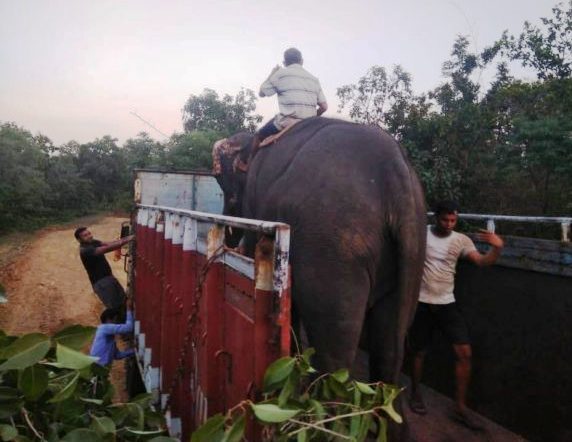 Share
Angul: Yashoda, the Kumki elephant, will be taken on a trial mission to catch Royal Bengal tiger into the Satkosia Wildlife Sanctuary in Odisha’s Angul district on Sunday.

The Kumki elephant, which arrived at Satkosia in a truck from Godibari of Chandaka Sanctuary with four trainers and a team of forest staff on Saturday, is being kept at the Purunakot.

Since physically tired after covering a distance of about 200 km, she is being rested and provided adequate food. To acclimatize her to the environment, she will be taken into the sanctuary after the doctors examine her health condition, official sources said.

The forest staff and a special team from Bandhavgarh Tiger Sanctuary in Madhya Pradesh will ride on the Kumki elephant and tranquilise the tigress, the sources added.

As informed by the additional PCCF Sudarshan Panda earlier, unlike other sanctuaries in the country, the Satkosia, barring the core forest area, has a vast stretch of dense bush. With the tigress mostly moving along the bushy areas adjacent to the human settlements, forest staff are facing difficulty in spotting and in their attempt to tranqualise her since the 11 days.

Since it was not possible to bring the Kumki elephant from Similipal National Park, the department had decided to engage the one of Chandaka sanctuary.

Panda also informed that talks were on with Karnataka to bring two more Kumki elephants to join the Mission Sundari in Satkosia.

Following the death of two villagers, who were suspected to have been killed by the tigress, the Forest department has decided to shift her to Nandankanan Zoological Park in Bhubaneswar.