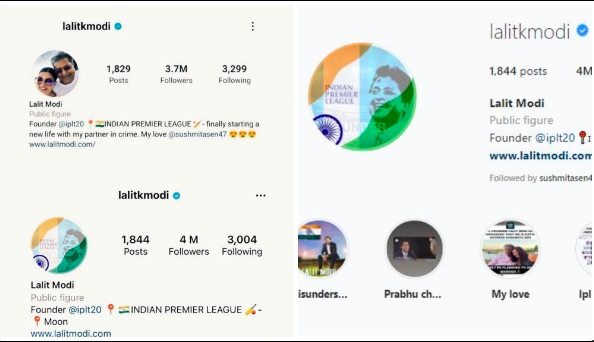 About two months, Lalit shocked the internet when he announced that he and Sushmita were dating.

In a lengthy post, he referred to the former Miss Universe as his ‘better half’ and revealed that he was ‘finally starting a new life’ with his partner in crime – Sen. He later clarified that they are not married, but just in a relationship, and may tie the knot soon if all goes well. Sushmita, on her part, never confirmed that she was in a relationship with Lalit, Instead, she wrote: “Not married… No rings… Unconditionally surrounded by love!”

The actor, however, was subjected to mean messages, memes, and jokes, with many implying she is with Lalit ‘for his money’. She responded to them by sharing an article by She The People on Twitter, using the headline as her caption. “The Problematic Culture Of Calling Women Gold Diggers,” and adding heart, hug, thumbs up, and folded hands emojis, with the hashtag ‘a self made woman’

However, Lalit has now changed his display picture on Instagram and his bio announcing Sushmita as his ‘love’ has also been erased.

While Lalit and Sushmita are yet to address the rumours, it has triggered a meme fest on Twitter.

After dating up to 2 Month #LalitModi to #SushmitaSen 👇😂 pic.twitter.com/6ScVCb4sMT

dating comes to an end just in 2 Month 🤣😂😉#LalitModi to #SushmitaSen be like:- pic.twitter.com/GMA9p8Y3WF

After getting to know Lalit Modi breaking up with #SushmitaSen
Single boys be like: pic.twitter.com/fMDGYfymAP

Lalit modi to sushmita sen after taking full attention thru her name pic.twitter.com/Mqf6TCUQi6

Did #LalitModi & #SushmitaSen break up?

Lalit to Sushmita who never even share a pic with him anywhere pic.twitter.com/LHsVrNzeV6

After dating up to 2 Month #LalitModi to #SushmitaSen 👇😂😂 pic.twitter.com/YOylTtVk4T