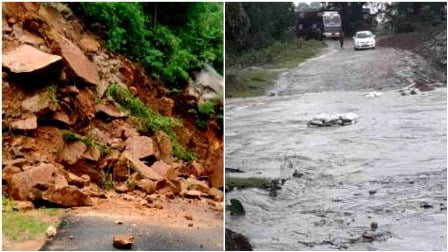 Berhampur: Road communication in Ankuli panchayat under Patrapur block in Ganjam district was disrupted following a landslide on Tuesday.

According to sources, road communication between Tadakasahi and Chariabad was disrupted after a portion of a hill suddenly gave way near Ankuli in the morning. However, there was no loss of life.

Apart from this, a diversion of an under-construction bridge near Badagada in the district was washed away in the morning disrupting road communication between Badagada and Berhampur.

Notably, the bridge was swept away during Cyclone Titili in 2018.

It has been raining heavily in Ganjam district since Monday night under the influence of a deep depression which crossed the Andhra Pradesh coast in the early hours of Tuesday.

Hit Hard By COVID-19, Odisha Tribals Take To Making Masks For A Livelihood