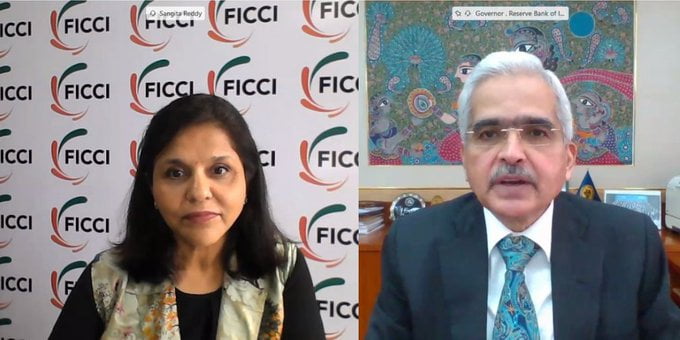 Mumbai: Reserve Bank Of India Governor Shaktikanta Das said on Wednesday that India’s economic revival is likely to be gradual as the country is still reeling from the impact of COVID-19.

Addressing the FICCI National Executive Committee meeting, Das said that the Q1 of GDP data was a telling reflection of how COVID-19 has affected the economy. He felt the two-year restructuring window allowed for companies impacted by the pandemic was a fine balancing act to maintain the interest of all key stakeholders.

“We don’t want to be back in the situation of five years ago, when NPAs of banks had risen very steeply, but we are also mindful of the fact that COVID has negatively impacted a large number of businesses, they also need relief,” Das was quoted as saying by Economic Times. “Businesses that were otherwise viable have been facing genuine cash flow issues. Emphasis will be to assist such companies so that they return to normalcy.”

He added that the central bank has taken note of all suggestions of the KV Kamath Committee on the loan recast scheme and will internally discuss them. “We do not want a repeat of what happened after 2008 with restructuring. We don’t want a repeat of the NPA surge we saw 4-5 years ago,” he added.

He was of the opinion that Tourism could be one of the engines of economic growth for India.

He also felt that India can move up in the global agricultural value chain by increasing its share of processed food exports, for which quality standards will be a critical factor.

The government has set the target for raising the share of processed food to 25 per cent of the total agricultural produce by 2025.”