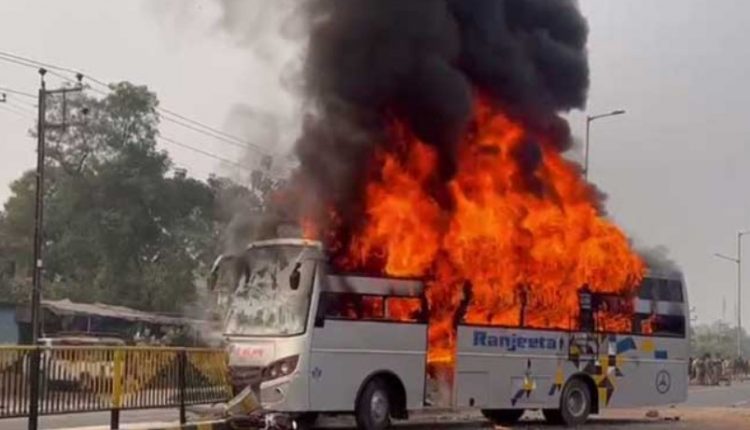 Baripada: A private bus was set on fire on by agitated local people after it ran over a biker in Odisha’s Mayurbhanj district on Sunday.

According to sources, the incident took place on National Highway 18 near a petrol pump at Telkho square on the outskirts of Baripada town. While the bike rider, belonging to Kuchei area of the district, was standing near the petrol pump to go to the town, the private bus came from behind and ran over him.

The local people rushed to the spot and rescued the biker who was critically injured in the incident. They rushed him to Pandit Raghunath Murmu Medical College and Hospital, at Baripada. The biker’s right leg has been badly damaged as the bus wheels ran over it, medical sources said.

Later, the biker’s relatives along with the locals went to the spot and set fire to the bus. There were no passengers in the bus. Its driver is absconding after the mishap.

On being informed, a team from Baripada Town police station along with a platoon of force arrived at the accident spot. The Fire Brigade also reached there and extinguished the fire. But the bus has been totally burnt in the fire. The police have registered a case and started an operation to trace the driver.

Teacher Hacked To Death By School Peon In Odisha’s Malkangiri