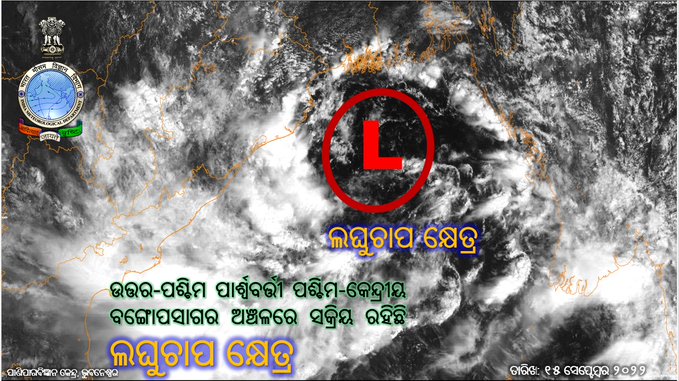 Bhubaneswar: A low-pressure area has formed over the north and adjoining central Bay of Bengal and it is likely to intensify in the next 24 hours while moving northwestwards towards the Odisha coast, the India Meteorological Department (IMD) informed on Monday.

Under its influence, fairly widespread rain with isolated intense spells and thunderstorm with lightning is likely across Odisha from September 19 to 21. The MeT office has issued an advisory for the twin cities of Bhubaneswar and Cuttack, which are likely to witness one or two intense spells of rain till 11 am on September 20.

Kandhamal, Kalahandi, Ganjam & Puri are also under orange warning with heavy to very heavy rainfall (7 to 20cm) forecast for one or place in these districts from 8.30 am on September 19 to 8.30 am on September 20. Heavy rainfall (7 to 11cm) is likely at one or two places in Gajapati, Malkangiri, Koraput, Nabarangpur, Rayagada, Khurda, Cuttack, Jagatsinghpur, Nayagarh and Kendrapada during this period, the IMD had earlier said.

On September 20, orange warning has been issued for Balangir, Kalahandi, Kandhamal, Boudh, Sonepur and Nayagarh. Heavy rainfall (7 to 11cm) is also likely at one or two places in Ganjam, Khurda, Cuttack, Dhenkanal, Angul, Deogarh, Sambalpur, Jharsuguda, Bargarh, Sundargarh and Nuapada.

While heavy to very heavy rainfall (7 to 20cm) to continue at one or two places in Bargarh, Balangir and Nuapada districts in the subsequent 24 hours, Nabarangpur, Kalahandi, Boudh, Sonepur, Sambalpur, Jharsuguda and Sundargarh may experience heavy spells of rain (7 to 11cm) during this period, it added.

According to the SOA’s Centre for Environment and Climate (CEC) here, the system is likely to move in a north-westerly direction towards western Odisha and Chhatisgarh from September 21 but would have an impact on coastal Odisha up to September 20.

Western Odisha districts could experience heavy to very heavy rainfall in one or two places on September 21 and 22, the bulletin said adding Bhubaneswar city could get moderate rainfall on September 20 and 21, it had earlier said.

Amid the heavy downpour, Hirakud Dam authorities have opened 4 sluice gates in a phased manner to release excess water from the reservoir.

Low Pressure Over Bay In 24 Hours, Heavy Rain Alert For Bhubaneswar, Cuttack Till 11AM Tomorrow