Magha Saptami: Odisha’s Chandrabhaga Beach Out Of Bounds For Devotees 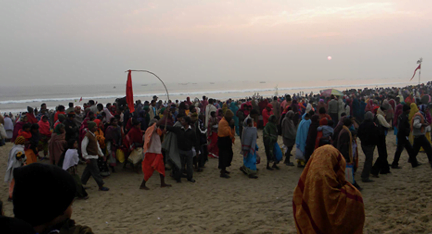 Bhubaneswar: Prohibitory orders will be in force around Chandrabhaga beach in Odisha’s Konark till 1 pm on Friday to prevent any congregation on the occasion of Magha Saptami.

The district administration decided to clamp Section 144 at the sacred pond and its surrounding areas to prevent the spread of COVID-19 as thousands gather for the holy dip early in the morning and offer prayers to the rising Sun here every year with an age-old belief that it would rid them of their sins.

The restrictions came into effect from 11 am on Thursday.

Also Read: Sec-144 To Be Clamped At Odisha’s Chandrabhaga Beach On Magha Saptami

“Barricades have been put up in the entire area. Arrangements have been made to prevent anyone from entering even the outer cordon area,” Puri SP Kanwar Vishal Singh to the media.

However, the deities would take the customary dip as per the rituals.

A total of 14 platoons of security personnel and 60 officers, including one Additional SP, five DSPs, and 150 home guards have been deployed.  Besides ensuring that the prohibitory orders are not breached, they would regulate traffic and entry of people accompanying the grand procession of the presiding deities of Konark, Lord Tribeniswara, Lord Aisaneswara and Lord Dakhineswara, he said.

COVID-19: Major Curbs To Take Sheen Off Khandagiri Mela In…