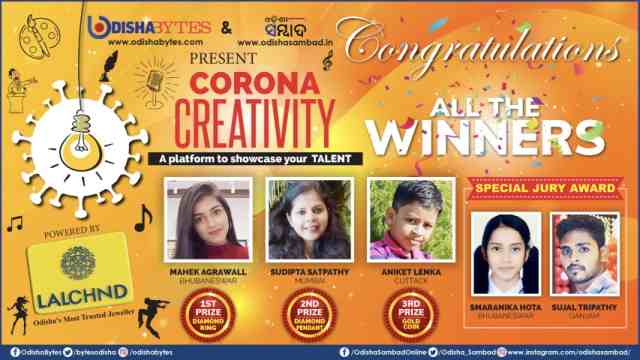 A three-member jury selected the awardees from the Top 20 finalists declared last week. The selection was done based on the views and likes received by the participant’s video uploaded on the websites and their respective YouTube, Facebook and Instagram platforms; uniqueness of creativity, presentation and quality of the video.

The Special Jury Awardees will also receive prizes. All the participants will receive
e-certificates besides discount coupons from KiTchen City and Clivea.com . The date for awarding of the prizes will be announced later.

The contest, held in May & June, was organised by the news websites, which belong to Bhubaneswar-based Frontier Media group, to encourage people to channelise their energies towards creativity and get rewarded for their artistic talents at a time when the entire world has come to a standstill under the impact of COVID-19 pandemic. It evoked overwhelming response from all over the globe with highly talented people, belonging to all age groups, sending their videos of singing, dancing, one-act play, storytelling, poem recitation, craft, painting and et al.