Man Forced To Carry Mother’s Body On Stretcher In Bhubaneswar! 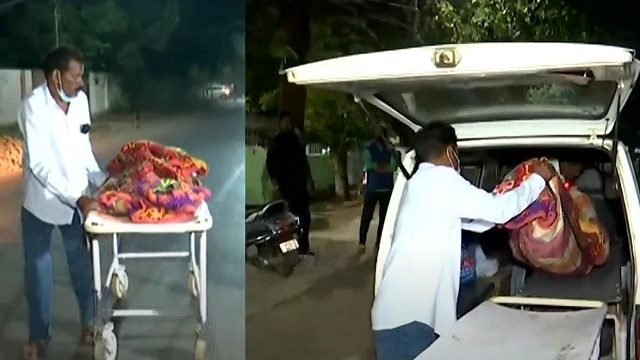 Bhubaneswar: A man was seen carrying his mother’s body on a stretcher at the Capital Hospital in Bhubaneswar on Monday light after allegedly being denied a hearse by the staff of the government-run healthcare facility.

According to sources, the 82-year-old woman was admitted to the hospital as she suffered a brain haemorrhage and went into a coma after falling down in the washroom last week. She was rushed to AIIMS, Bhubaneswar, and her treatment was initiated.

“Due to the lack of beds in the emergency ward, I had to shift her to Unit-6 Capital Hospital,” her son Manas Bahubalendra of Dagarpada told local media. She died on Monday night while undergoing treatment at the hospital.

He then sought a vehicle under the Mahaprayan Yojana of the state government to carry the body to his village but was allegedly denied. “The authorities said that the government ambulance cannot be used for carrying the body to his village. A private ambulance asked for Rs 5000 and I was not in a position to cough up that amount,” said Bahubalendra.

Having exhausted all options, he decided to carry the body on the stretcher to the village, around 50 km from Bhubaneswar.

Some social workers spotted him with the stretcher and contacted the Private Ambulance Association, which lent him an ambulance to carry the body to the village.

The Capital Hospital authorities could not be contacted for their comments on the issue.