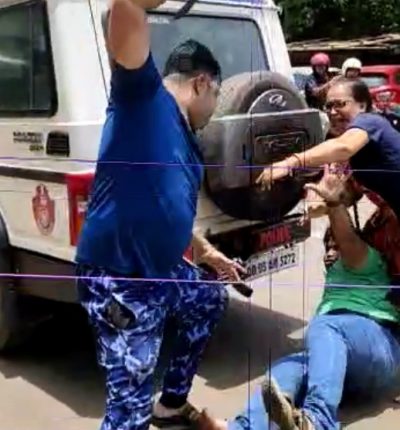 Bhubaneswar: In a shocking incident in Odisha capital, a man allegedly attacked his elder brother in presence of police on Wednesday.

According to sources, Dipti Badu alias Dipu and his elder brother Chandrakant were engaged in fight over a previous dispute on Ratha Road in Old Town of the city in the afternoon. On being informed, police went to the spot and mediated in the matter to pacify the fighting brothers and resolve the dispute.

A video of the incident that has gone viral on social media shows that Dipu pushed aside a policeman and as the latter fell down, he attacked Chandrakant with a sharp weapon. Chandrakant, who sustained critical injuries in the attack, started bleeding profusely.

The police admitted Chandrakant in a hospital and his condition was stated to be critical.

The police have detained Dipu in connection with the incident and started investigation, said Zone II SP Anirudh Mishra.