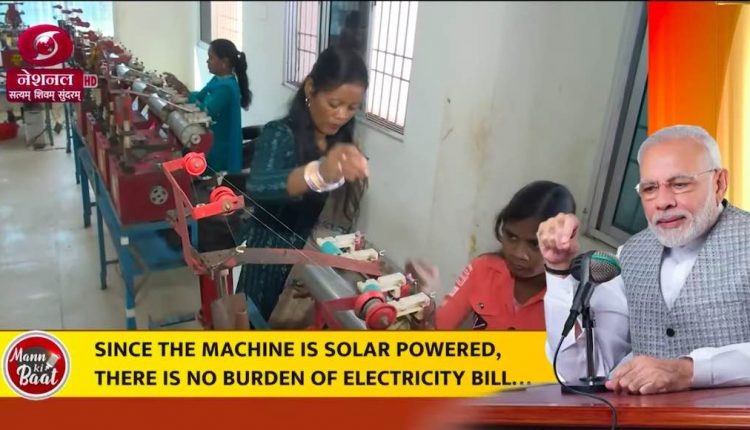 “In Chhath Puja, the Sun worship is proof of the deep connection of our culture with nature and this solar energy is transforming lives of the rural poor and middle classes,” he said.

Elaborating on Kunni’s success story at Karadalpal in Odisha’s Keonjhar district, the PM said she trains tribal women on spinning silk on solar-powered silk reeling machines. “Since it is solar-powered, there is no burden of electricity bill on these women and they are getting income,” he said.

He also narrated similar initiatives in other states. “Sensitivity towards the environment is a way of life for us. People have become more aware of eco-friendly living and eco-friendly products in recent times,” he said.

The PM also said that Indian industries and start-ups are bringing new innovations and technologies into the space sector. “The whole world, today, is astonished to see the achievements of India. After the space sector was opened for India’s youth, revolutionary changes started coming into it,” he said.

Student power is the basis of making India powerful. It’s the youth of today, who with their talent, will take India to new heights in the coming years, Modi further said.

“The youth is working at an unprecedented pace through hackathons to solve challenges that the nation is facing. This month, 23 IITs came together to showcase their innovations and research projects. IIT Madras & IIT Kanpur have played a leading role in developing India’s indigenously developed 5G testbed. The IIT-Bhubaneswar team has made a portable ventilator for infants. This ventilator can be used on battery and can be used in remote areas to save the lives of premature infants,” he added.