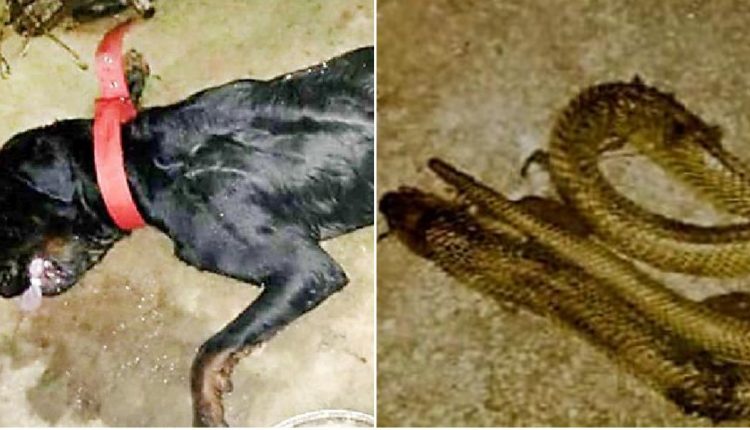 Bhubaneswar: It was a replay of sorts of the blockbuster Hindi movie Teri Meherbaniyan, at Mundamuhana village under Jaanla police limits, on the outskirts of Bhubaneswar, where a pet dog laid down his life to protect his master’s family.

According to sources, grandchildren of Krushna Samantray, Som (3) and Prachi (6) were playing under the portico of his house on Tuesday evening when a 5 feet long cobra suddenly entered the front yard. While other family members were also sitting there and the pet dog, Laden, was on a leash.

On seeing the venomous snake, a terrified Prachi held on her brother and started crying. Following which, the one-year Rottweiler, despited being chained, jumped at the cobra and gnawed at its head. It released the cobra only after it had died.

Soon after the incident, the owner, apprehending the injury of Laden in the duel, decided to take him to a nearby veterinary hospital. But his pet died after a while.

“I will never forget Laden’s supreme sacrifice for my family. I pray to God that he be born as my son in my next birth,” said Samantray’s wife.

THE ACT OF FAITHFULNESS

In June this, a similar incident was reported from Badagada canal road in the Odisha capital. When a 5-ft long Cobra tried to enter the house of one Sambit Das, his pet dog guarding the gate attacked and mauled the reptile despite being bitten by it.

In March 2019, a pet dog sacrificed its live to save members of his master’s family from the attack of venomous snake at Jatni.

In August 2017, a pet dog died fighting a poisonous snake to protect its master’s family at Munda Muhana village in Janla area, on outskirts of Bhubaneswar.

Odisha FC To Play ‘Home’ Matches At ‘Away’ Venues!