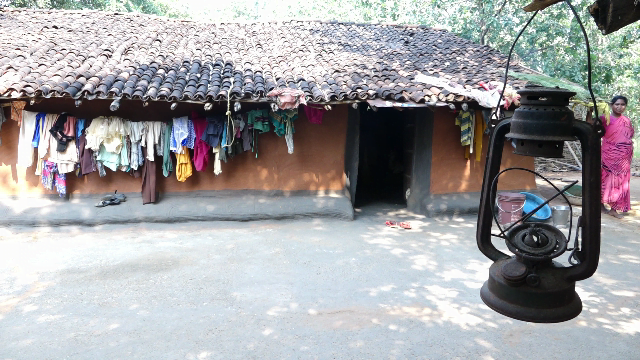 Bhawanipatna: Two tribal families of Kalahandi have been living in the forest for the last 38 years in the hope of a better future.

Nine members of these two families live in the “Bajargad forest”. The members of one family are Alekha Majhi (40), his wife Radhika Majhi (35), daughter Mita Majhi (14) and mother Kakeya Bewa (70). The other family comprises Arjun Majhi (38) and his two wives Ambika Majhi (35) and Santara Majhi (33), their son Firoj Majhi (14) and daughter Rebati Majhi (2).

Along with cultivation, collection of broom sticks, mahua, tendu fruits and firewood are the main source of livelihood for these twp families. They sell thesein Kesinga market, 15 km away from the forest.

In 1981, the then Chief minister of Odisha, Janaki Ballabh Patnaik had laid a foundation stone at Kantesir village to settle 35 displaced families under the integrated housing scheme. The place was chosen in the jungle, 7 km away and named as Jayantipur village under Kantesir gram panchayat.

A senior journalist, Santanu Behera said, “The families were evacuated by the district administration during heavy flood in 1980. The river “Tel” swelled near Kesinga, affecting a large number of people. At least 10 districts were affected and more than 70 people lost their lives,”

However, after 10-12 years of staying in Jayantipur village, 33 families out of 35 returned to Kantesir village in the absence of drinking water and electricity. Since then, 12 families got houses under Indira Awas Yojana (IAY) in Kantesir village and others have filed their applications in the gram panchayat.

“A big well was dug at that time for drinking water. There was only shortage of water in summer. We had no and chose to come back to Kantesir,” said Suna Majhi.  However, the villagers go to Jayantipur village for cultivation of paddy and other pulses.

The eldest woman, Kakeya Bewa who still lives in Jayantipur, says she had spoken to the Chief Minister while garlanding him and he had assured to provide all the facilities. “I recall him saying that all the required infrastructure would be put in place here but till today, the village has not been electrified,” she said.

The CM was accompanied by the then District Collector, Kalahandi, Meena Gupta.

In 2017-18, a kuchcha road was constructed at a cost of Rs 5 lakh. From the point this road ends, one has to walk for 5 km on a narrow road in “Bajargad jungle” to reach Jayantipur. The family members have to cross two nallahs. An under construction bridge is also seen over a nullah.

Alekha Majhi says rainy season adds to the woes of the families as the children cannot reach school and stay at home for four months. “My daughter Mita studying in Class 10 walks 7 km daily to reach Kantesir government school,” he said adding that they cast their votes during elections in the hope of a better future.

Alekha alleges that she lost two children due to lack of amenities. One died in the womb while the other died in Kesinga Hospital after birth.

ANM and Anganwadi workers have never reached Jayantipur village in the past several years. A borewell was dug but it is defunct now. These two families of Jayantipur are yet to get houses under Indira Awas Yojana (IAY).

Kantesir Panchayat sarpanch, Jitendra Bramha said a proposal for digging a new borewell has been made. The Block Development Officer (BDO) of Kesinga, Bhimsen Sabar said he will personally visit the place and houses will be provided to the villagers as soon as possible.