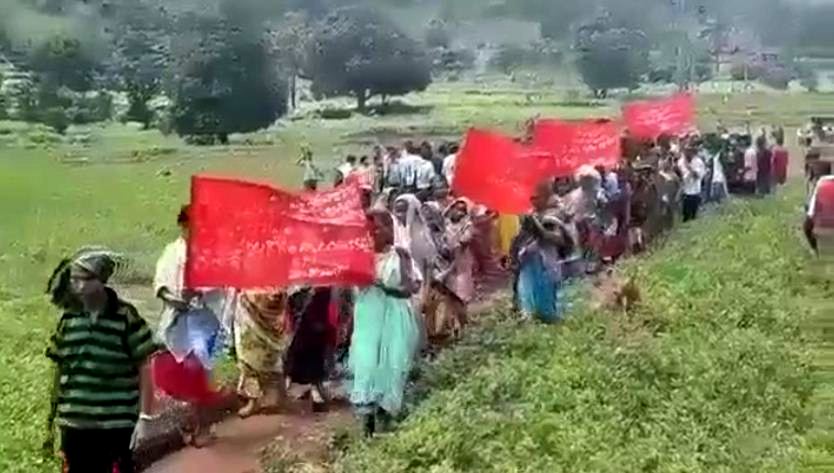 Malkangiri: Extending their support to the Maoists, more than 600 villagers took out a protest rally near the Odisha-Chhattisgarh border on Sunday morning, on the second day of the Martyr’s Week.

Led by top Maoist leader Rabana of the Andhra Odisha Border Zonal Committee, the tribals of Ralegada and Korukonda panchayats of Malkangiri district also participated in the rally, holding the flags and banners of the outlawed outfit.

Sources said more than 10-12 hardcore Maoists and heads of 40 villages of these two panchayats were present.

Later at a meeting, the Maoist cadres condemned construction of the Gurupriya bridge in Chitrakonda block, which was recently inaugurated by Chief Minister Naveen Patnaik.

Addressing the meeting, the Maoist cadres told the villagers that the Odisha government has constructed the bridge to loot the minerals from the cut-off panchayats of Chitrakonda block.

On the occasion, the Red rebels offered tribute to their 30 cadres, who were killed in an encounter with the Andhra Pradesh Greyhound Police and the Odisha Police at Ramaguda near Balimela reservoir in Malkangiri district on October 24 in 2016.

Though the police had the information about the meeting organised by the Left-wing extremists, they could not venture into the inaccessible location about 40 km from Chitrakonda, the sources added.

Meanwhile, in view of the Martyr’s Week observed by the People’s Liberation Guerrilla Army (PLGA) of the Maoists, government-run buses have been suspended on various routes of Malkangiri district.

In Rayagada district, services of nine government buses on seven routes to the remote areas has been stopped for a week till August 3.

Several posters and banners have been recovered the Maoist-affected areas of Rayagada, Kandhamal, Malkangiri and Bargarh districts in which the ultras urged the people to make the Martyr’s Week successful.

On the first day of the Martyr’s Week, the rebels had killed a tribal, identified as Jairam of Kumkumpudi village of Vishakhapatnam district in Andhra Pradesh, suspecting him a police informer.

Talking to mediapersons, Additional SP, Rayagada, Y Jagannath Rao said in view of the Martyr’s Week, the intelligence network has been strengthened in all Maoist-prone districts of Odisha.

“The anti-Maoist force, comprising SOG, DVF, CRPF, BSF, has started intense combing operations in these districts to prevent any subversive activity,” he added.