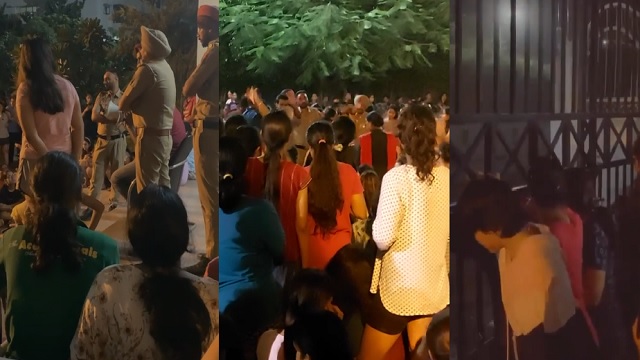 Chandigarh: A massive protest broke out late on Saturday night on the Chandigarh University campus after a woman student allegedly leaked ‘objectionable videos’ of other hostel inmates, which are being widely shared on the internet.

The police said they are verifying the claims that the accused woman was being blackmailed by a man from Shimla.

The accused was also allegedly demanding money from others for not leaking them. After the matter came to light, students poured out of their hostels and held a protest, added sources.

A case was registered under Section 354C pertaining to voyeurism under the Indian Penal Code and Section 66E of the Information Technology Act (punishment for violation of privacy) against the woman at Kharar (Sadar) police station.

There were also reports of a few students attempting suicide following the incident. But Chandigarh University’s student welfare officer refuted the reports stating that it is social media rumour. However, one student fainted during the protest and was rushed to the hospital immediately.

“There are rumours that 7 girls have committed suicide whereas the fact is that no girl has attempted any such step. No girl has been admitted to hospital in the incident. All the rumors of objectionable videos shot of other girl students are totally false and baseless. No videos were found of any student which are objectionable except a personal video shot by a girl which was shared by her with her boyfriend” authorities of Chandigarh University told media.

Meanwhile, Punjab School Education Minister, Harjot Singh Bains appealed to the students to remain calm and tweeted “I humbly request all the students of Chandigarh University to remain calm, no one guilty will be spared. It’s a very sensitive matter & relates to dignity of our sisters & daughters. We all including media should be very very cautious, it is also test of ours now as a society.”

“The woman had admitted that she sent her photographs to her friend but they were verifying whether she had sent pictures of other girls as well. We are investigating the matter. There was a protest and everything is under control,” Mohali SSP Vivek Sheel Soni told TNIE.

“So far in our investigation, we have found out that there is only one video of the accused herself. She has not recorded any other video of anyone else. Electronic devices and mobile phones have been taken into custody and will be sent for forensic examination,” said Mohali SP.

I humbly request all the students of Chandigarh University to remain calm, no one guilty will be spared.

It’s a very sensitive matter & relates to dignity of our sisters & daughters.

We all including media should be very very cautious,it is also test of ours now as a society.