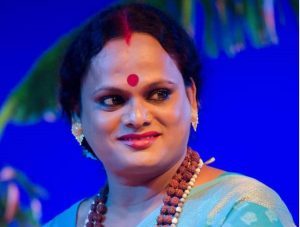 Behind that signature smile is the story of pain and suffering and the facade of a big bindi and dark lipstick hides behind it years of identity crisis and bruises of physical and mental abuse.

Meet Meera Parida, India’s answer to Marsha P Johnson, the pioneering figure in the LGBTQ+ rights movement. On June 30, Google Doodle closed Pride Month by paying respect to the icon. There was an illustration of her by Los Angeles-based guest artist Rob Gilliam on Tuesday’s Doodle.

Much like the African-American, transgender woman from New Jersey whose fight for the rights of transgenders had a big impact in the 1960s and 70s, closer home in Odisha, Meera Prada has been fighting against the deep-rooted prejudice against ‘sexual minorities’ for many years now.

The Pride Month has just concluded and Meera is wearing a huge bindi signifying the colours of the LGBTQ community. “This year’s pride parade was held online due to COVID-19,” she told OdishaBytes.

Her moment of pride and validation of her fight for the rights of sexual minorities came when she was appointed the first transgender vice president of Biju Mahila Janta Dal by Odisha Chief Minister Naveen Patnaik in 2019.

“I could resonate with Meera, her character and story felt like mine. Plus, I am a big devotee of Lord Krishna, hence the name Meera,” she said.

Meera Parida was born as Mayadhar Parida, a name her grandmother gave her after Lord Vishnu. She is now known as Meera. However, her journey from Mahidhar to Meera was not so pleasant.

She left home at the age of 12, did menial work to support herself financially at age of 15, was sexually abused at times but told none. She pulled herself from being bullied at school for her physical orientation and laughed at. Her voice shakes a bit while relating how embarrassed she felt when her parents had to strip her in front of the whole colony to prove she was a male. Her early days were by no means easy.

I felt like I was the only one like this in the world until I met my friends in Bhubaneswar. At the Mumbai railway station years later, I came to understand the Kinnar community.

“It is disrespectful how people treat us. They line up outside to seek our blessings and give us coins on Wednesdays but two days later, they look at you with contempt. They shun us during the day and solicit us at night. You see the hypocrisy.”

In India, people seek the blessings of kinnars or trans people for good luck and prosperity. The goodwill ends there. Everyone talks of equality but no one has the courage to implement it. Work opportunities and acceptance at the workplace is the only way to change the perception of the people towards our community, says Meera.

Speaking about the legal rights of her community recognised by the Constitution, she says, a day will come when every right will be bestowed upon us. However, she wants to ask the Supreme Court, who has the right to be called the first category and second category of gender if they are the third, male, or female?

According to an article published in The Indian Journal of Psychological Medicine, the suicide attempt rate among transgender persons ranges from 32% to 50% across the countries. On this, Meera says, the life of transgenders revolves around depression, insecurity, and frustration. “It is frustrating to keep screaming and proving to people that we too are human. Why do I need to keep proving it to exist? But, we must exist, you know.”

Last year, on the occasion of World Toilet Day, along with other activists, she demanded gender-neutral toilets and transgender signage outside toilets in public and private places.

Parida loves to pen poems in her free time. Her Facebook page is full of her poems. However, it is sad to know that its only about pain, wanting love and depression. Can’t people see the pain and spare a thought for us?

I felt like I was the only one like this in the world until I met my friends in Bhubaneswar. At the Mumbai railway station years later, I came to understand the Kinnar community.

She has utilised the lockdown period to her advantage penning two books, ‘Andhar Ra Aalingan’ and ‘Bhirn Ek Saabitri’. Both deal with the rights of her community and are ready to be published in Hindi and Odia anytime soon.