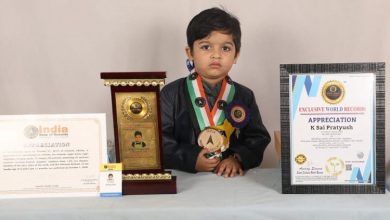 Cuttack: He can speak four languages, identify colours, vegetables, fruits, body parts and shapes, recite 36 rhymes, English alphabets, tell national symbols, numbers (1-30), month names, days in a week and sing the national anthem without fumbling once and that too at the age of two years and 11 months.

This talent has helped K Sai Pratyush of Cuttack city earn a place in the Exclusive World Records.

A resident of CDA Sector-11, Sai Pratyush is studying in pre-nursery at a private school. Born to a South Indian father and Odia mother, he started speaking multiple languages at a very early age.

He can recite rhymes in Odia, Telugu, Hindi and English.

“He always had a will to learn new things and a good memory,” said father  K Sai Kishore.

According to mother Deeptirekha Mohanty, it was his interest that pushed them to keep teaching him new things.

Pratyush received the certificate in October this year. His name also features in the India Book of Records.