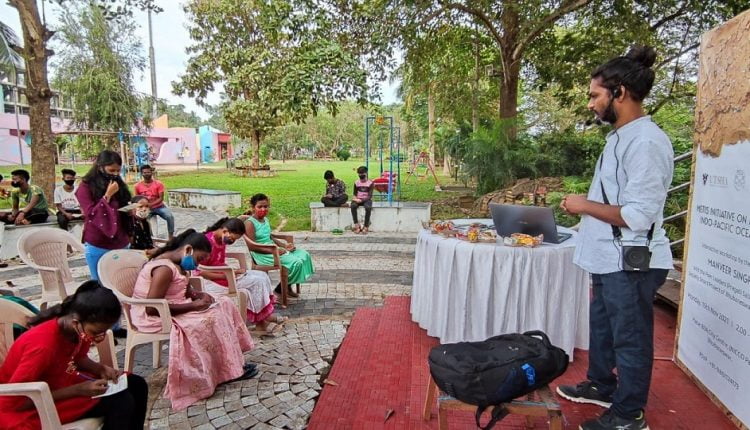 Bhubaneswar: With plastic menace attaining a dangerous level, a  Delhi-based artist Manveer Singh shared some ideas with students on how to convert plastic to meaningful art forms at a workshop in the city.

Manveer, who is the winner of “METIS Initiative on Plastics and Indo-Pacific Ocean 2021”, interacted with 28 peer leaders (pragati stathis) of the Socially Smart Bhubaneswar Project and conducted interactive workshop on BDA City Centre campus.

Manveer, on Residency of Utsha Foundation for Contemporary Art, shared his ideas with the children. Manveer’s residency at Utsha is being organised in collaboration with French Development Agency (AFD).

The artist, through interactive tools explained how plastics are polluting the soil, ocean and air and called upon all to start their own initiatives to save the world before it is too late.

As part his awareness and art work, Singh is collecting plastics through his 40-odd habit changer boxes placed at several locations across the city. He is also interacting with students of different educational institutions to spread awareness on plastic pollution.

Singh has so far helped in up-cycling/reusing more than 350 kg plastics in India. At the workshop he taught techniques of weaving coloured plastics to create beautiful objects and interacted with participants at personal level besides taking their views on issues ranging from plastics at global level.

As part of this METIS grant, Manveer will develop an artistic work on the endangered sea turtles on the concept of plastics and ocean survival in Odisha context. The artwork will be based on plastic waste to create public awareness about recycling and the need to reduce consumption. The art work is likely to be displayed on Puri Beach on November 23. The final display at Utsha Foundation will be held on
November 28.

METIS initiative is part of French Development Agency’s (AFD) 80th anniversary on December 2. For this, the agency has planned events across Indo-Pacific Region. AFD has decided to launch a global initiative METIS, to create a global public opinion on marine debris and pollution.

Currently, AFD is funding City Investments to Innovate, Integrate and Sustain (CITIIS) Programme in Bhubaneswar and 11 other cities of India through the Smart City Mission.

Singh’s entry was selected from 26 applicants. His project “From Plastic to Art” was selected by a two-tier jury comprising experts in the field of Art, Environment and Urban Development during September last.

Hind Cinema, One Of The Oldest Theatres In Odisha’s Cuttack, To Be Razed; Know Why