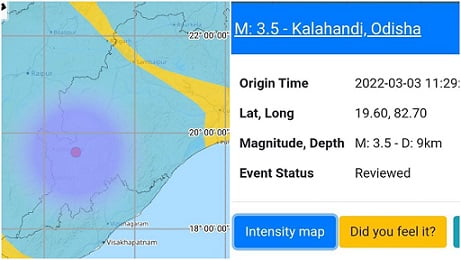 Bhubaneswar: An earthquake of slight intensity with a magnitude of 3.5 on the Richter scale was experienced in Odisha’s Kalahandi district at 11.29 am on Thursday.

The epicentre lay at latitude 19.60 degrees and longitude 82.70 degrees.

The tremor was also felt in Chandahandi, Jharigaon, Umerkote and Dabugaon blocks of Nabarangpur district at the same time. The quake lasted for 6 to 7 seconds in the area.

Though no major damage was reported from any place, cracks developed on the mud walls and tiles fell off the roofs of kutcha houses in the affected areas.