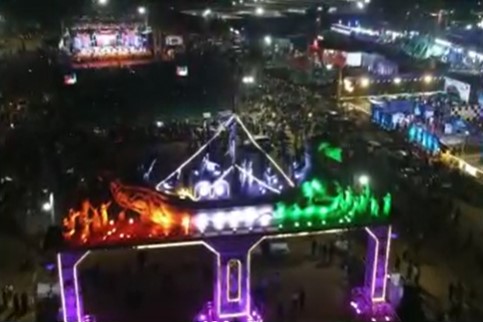 Cuttack: With Odisha celebrating ‘Mandia Dibasa’ (Millet Divas) for the first time, millets and diversified food products are selling like hot cakes at Balia Jatra, which is being held at Gadagadia Ghat on the banks of the Mahanadi in Odisha’s Cuttack.

According to reports, a stall set up by Pankajini Producer Group of Cuttack’s Dampada block has increased its production to meet the growing demand at the fair. Around 15 varieties of biscuits, namkeens, cookies, and ladoo made of millet (Mandia), pearl millet (Bajra) and foxtail millet (Kangni) grains, besides the millet ‘chhatua’ and grains, are being sold here.

The millet diversified food products are of two types, with sugar, and without sugar, having a two-month expiry date and price ranging from Rs 30 to Rs 90 based on the weight. Notably, molasses (a substance resulting from refining sugarcane or sugar beets into sugar) and honey have been used as sugar in food products.

In the last three days, the producer group has already made business worth Rs 1.5 lakh. Four more self-help groups (SHGs) have been engaged to prepare the millet-based food products as almost 70% of the stock has been exhausted.

Notably, the group was formed a few months ago under the aegis of ORMAS and Mission Shakti. The expertise of women members in preparing different varieties of millet diversified products and packaging helped it to launch the products at the Pallishree Mela.

Odisha’s Bhitarkanika National Park To Bar Visitors For 10 Days; Know When & Why