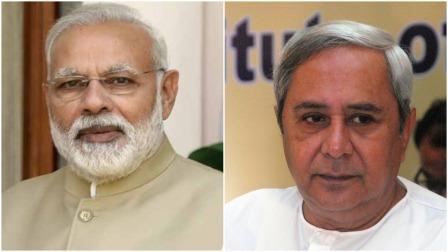 Bhubaneswar: Prime Minister Narendra Modi on Wednesday congratulated Naveen Patnaik after he assumed the office of Chief Minister of Odisha for the fifth term in a row.

In a tweet, the Prime Minister convey best wishes to Naveen and his team and assured him of complete cooperation from the Centre for Odisha’s progress.

Congratulations to Shri Naveen Patnaik Ji on taking oath as Odisha’s Chief Minister. Best wishes to him and his team in fulfilling the people’s aspirations. I assure complete cooperation from the Centre in working for Odisha’s progress. @Naveen_Odisha

President Ram Nath Kovind also spoke to Naveen and greeted him on assuming the office of Chief Minister for 5th consecutive term.

Senior BJP leader Dharmendra Pradhan also congratulated the Chief Minister and hoped that the state government will proactively support the Centre in uplifting the lives of the people of Odisha.

Best wishes to Shri @Naveen_Odisha on taking oath as the Chief Minister of Odisha. I am hopeful that the State Govt. in Odisha will proactively support the Centre in uplifting the lives of our Odia brothers & sisters to help further the dream of a developed & #NewOdisha.

Congratulations @Naveen_Odisha Naveen Babu for taking oath as the Chief Minister of Odisha for the fifth time. We wish you well. Greetings to the people of Odisha