Monsoon Set To Be Delayed, Expected To Hit Kerala By June 3 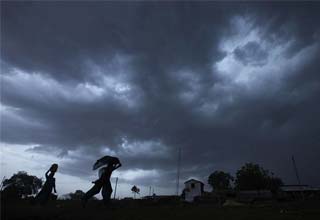 New Delhi: India Meteorological Department (IMD) said on Sunday that the arrival of monsoon over the Kerala coast is now likely to be delayed by two days.

The onset of this year’s southwest monsoon will now most likely be by June 3.

Acording IMD Director General Mrutyunjay Mohapatra, the hindrance in the progress of southwest monsoon is due to a cyclonic circulation along the Karnataka coast.

“The southwesterly winds could strengthen further gradually from June 1, resulting in likely enhancement in rainfall activity over Kerala. Hence the monsoon onset over Kerala is likely to take place around June 3,” IMD said.

IMD had predicted a fortnight ago that monsoon will arrive over Kerala by May 31 this year, with an error margin of plus or minus five days.

Monsoon is expected to be normal this year.

The normal date for onset of monsoon is June 1, marking the start of four-month rainy season in the country. Over than 75 per cent of India’s annual rainfall happens during the monsoon season from June to September.

Lockdown Extended: Restrictions Relaxed In 3 Odisha Districts With TPR Below 10%