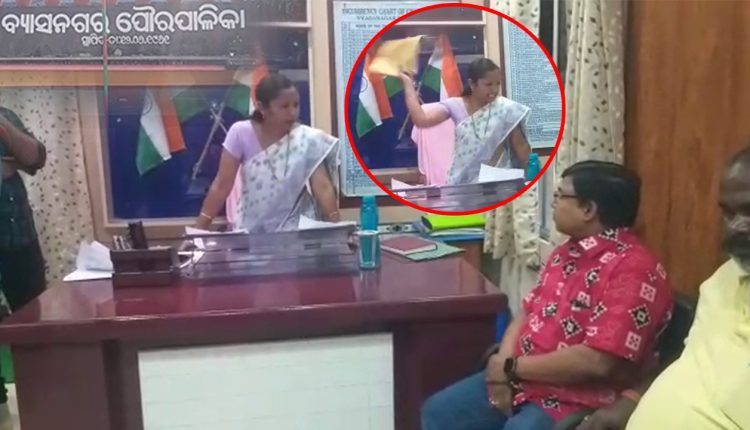 Jajpur: In a fit of rage, Chairperson of Byasanagar Municipality in Odisha’s Jajpur district allegedly hurled verbal abuse and threw a file at the executive officer of the civic body during a meeting.

A video of the scene that went viral showed Municipality Chairperson Sangita Pingua shouting at executive officer Ashok Kumar Rout in front of several others including council members over issues relating to installation of a mobile tower.

An infuriated Pingua was also seen throwing a file at the officer and asking him to leave her room and immediately cancel the NOC given for installation of the tower in ward number 8 in the civic area.

Giving a clarification about the incident that reportedly happened on Tuesday, the Chairperson later claimed that she had no intention to throw the file at the officer.

Since Rout was sitting at a distance, she simply tried to pass the file on to him, Pingua claimed.

The residents of ward number 8 including councilor of the area had sought permission from the municipality for installation of the mobile tower, Rout said, adding that the NOC was given after field verification.

However, some others later opposed the installation of the tower and approached the Municipality Chairperson. Some people also gheraoed her office and house in protest, Piugua said, adding that the meeting was called to discuss the issue and she got a little angry over Rout’s response.

The executive officer, who was transferred to Khandapada after the incident, said that the Chairperson was also unhappy over the installation of bio-metric machine at the office and earlier also she had misbehaved with him.

The NOC for he tower was given after proper field verification following demand by the residents of the ward, but the Chairperson wanted it to be cancelled after some people raised objection, he said.