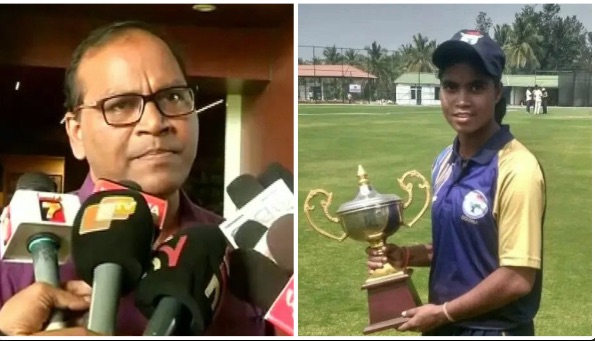 Bhubaneswar: Amid foul play allegation in the untimely demise of woman cricketer Rajasree Swain, who was found hanging from a tree in a forest after having gone missing for two days, Cuttack DCP Pinak Mishra on Friday said that an inquest is being carried out and the cause of the death can be ascertained only after a postmortem.

While refusing to divulge any further details, he said that an unnatural death case will be registered at Gurudijhatia police station under whose limits the body was found and a probe on the allegations being made by her family will be made only after they lodge a complaint.

Though the reason for her death is still not clear, she was reportedly upset over not finding a place in the 16-member probables for Odisha women’s team. The Odisha team was announced on January 10.

Alleging that there were injury marks on her body, her family members said that she was intentionally omitted from the team despite performing well during the camp and had opposed favouritism in the selection process by Odisha Cricket Association (OCA). “The OCA authorities have killed my daughter to suppress their wrongdoings,” said her father Gunanidhi.

Rajasree, a native of Bhuagaon under Ramachandi police limits in Puri district, was a right-arm fast medium bowler and right-handed batter.

Her brother told a local channel about receiving a call from an unknown person, who informed them in Hindi that she was missing from her room. Her roommate Rashmi Laxmi Ekka also confirmed that she was a little upset and had cried after her name did not figure in the list of 16 probables for Odisha women’s team.

The 26-year-old had last called her family on Wednesday following which her phone was found switched off. She had checked out of the hotel and left for Puri the hotel on that day after informing Odisha women’s coach Pushpanjali Banerjee, who later lodged a missing complaint with Mangalabag police station in Cuttack.

Some locals, who had reportedly gone to collect firewood, spotted a scooter and helmet on the Bramhanabast-Kapursingh forest road and informed Mangalabag police. A team of police officials rushed to the spot and started searching for her. She was then found hanging from a tree with the help of her dupatta (scarf).

Odisha Cricket Association CEO, Subrat Behera, however, clarified that there were no irregularities in the selection. “It is sad that a promising OCA registered player, who was part of was part of the Odisha T20 squad, is no more, But as far as the allegations of irregularities are concerned, the selection is done in a transparent manner and every performance of every player picked is uploaded on our website and the mobile app for everybody to see.”

He further said that Rajasree was in the 25-member squad but could not make it to the final list of 16. “She did not perform well and was excluded from the list. They cannot hold us responsible for her death just because she was not selected in the Odisha team,” he added.