Nandankanan Gharials Released In Mahanadi To Increase Their Lot 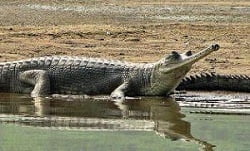 Bhubaneswar: The Forest Department on Monday released five Gharials (fish-eating) crocodiles of the Nandankanan Zoo in Satkosia, Tikarpara and Sunakhania in the upper catchments of Mahanadi.

Informing this to the media here, Principal Chief Conservator of Forest (PCCF) Ajay Mahapatra said the five Gharials have been fitted with radio collars. To monitor their movement, three research scholars have been appointed, he added.

He said if these crocodiles adapt themselves to the environment, 30 more will be released in the next phase.

Considering the dwindling population of Gharials in the Satkosia gorge over the years, the Forest Department has planned to increase the population of these fish-eating crocodiles in Mahanadi.